Brian O'Driscoll has all the attributes to forge a first-class coaching career, according to Ireland boss Joe Schmidt.

Even before Ireland's Six Nations triumph, bookmakers had O'Driscoll installed at 16/1 to coach the British and Irish Lions to a series win before 2030.

O’Driscoll has already tried to play down a quick-fire move into management, but Ireland head coach Schmidt remains confident the Leinster star has all the qualities for success.

"I think he'd be good at whatever he does, in the short term that's probably house husband, but in the long term I think he'd make a great coach," said Schmidt.

"He's intelligent, he's got great values, and he is hard-working, he's a great role model for people and he knows the game inside-out.

"Certainly I've learned a lot from him."

Schmidt said he has no plans to try to draw O'Driscoll into his coaching staff for Ireland's assault on the 2015 World Cup.

"To be honest at the moment our coaching team is functioning really well," he said. "I haven't really thought about that, so I'll think about it and come back to you."

Schmidt admitted his overriding emotion after a testing Six Nations was relief, at being able to meet the "growing expectation" of the Irish public.

"I'm just incredibly relieved, because there was a growing expectation, probably from that last game in November [the narrow defeat to New Zealand in Dublin], that we could maybe do something a little bit special," he said.

"But to come to France having won here once in the last 42 years, to win a championship, it's a dream come true really.

"It was work ethic and unity that carried us home, and I thought we saw some trust in each other on Saturday that's developed with the group that's been there.

"And they have earned the right to be champions I think.

"We've never sat back and thought we had a talented group, we've never said we're capable, we just said we've got to work hard to get our nose over the line."

Schmidt challenged Ireland's stars to ensure their bump back to earth, and the reality of club action, does not coincide with a drop in standards.

Ulster eased past Scarlets 26-13 at Ravenhill in Pro12 action on Friday night, Paddy Jackon's brace of tries sparking the victory.

Wing Tommy Bowe was also on the scoresheet, with Schmidt mindful a successful Six Nations will not stop him changing a winning starting line-up in future.

"I suppose we've just got to make sure our players maintain the standards they've set," said Schmidt.

"They will go back to their provinces, roll their sleeves up, we are very open selection-wise, and there's an expectation that they will continue the form they have shown over the last eight weeks.

"I think it was even evident on Friday night, it was great to see Paddy Jackson out there at Ravenhill, scoring a couple of tries and Tommy doing the same thing.

"Those guys will keep pressure on the guys who have numbers one to 15." 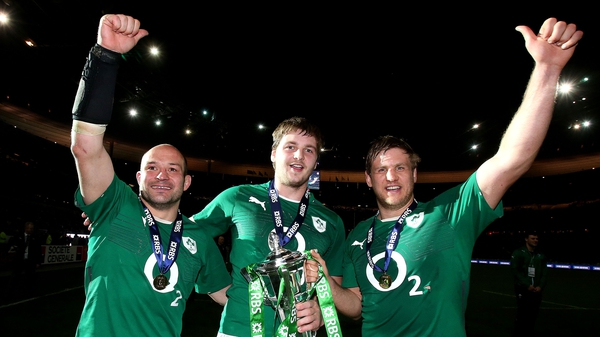 Chris Henry: Ireland must push on to World Cup