France coach Philippe Saint-Andre has named 19-year-old Fickou in his starting XV for Saturday's early-evening clash with Ireland that brings this year's RBS 6 Nations to a close.

The Stade Toulouse youngster starts a game for France for only the second time - his first appearance from the get-go came against Tonga last autumn - and will pair up with Mathieu Bastareaud in midfield as France look to combat the threat posed by playmaker O'Driscoll and centre partner Gordon D'Arcy.

O'Driscoll makes his 141st and last appearance at international level in the Stade de France tussle, which will determine who finishes as Six Nations champions.

Ireland head into the weekend as strong favourites, and a win of any kind in Paris will suffice unless England win well against Italy in Rome earlier in the day.

France can still scupper both teams' hopes, but unless Italy spring a major shock against England they must post a hefty victory over Ireland to give themselves a chance.

Fickou could be a key figure, given the responsibility of the role allocated to him.

"I'm very happy," Fickou said of his opportunity. "It's also a great pride to make my debut in this context, against Ireland, for the final match of the Six Nations, at the Stade de France and against O'Driscoll. He's an icon in Ireland and has really contributed to his country."

Fickou believes playing alongside Bastareaud is a combination that "should work", despite admitting: "I've never really played with him but we've trained together a lot this week. And since mid-January."

Now he has been afforded his chance, Fickou is eager to take it. He made his France debut against Scotland in last year's Six Nations, and as a substitute plundered the try in this season's competition that condemned England to defeat in Paris.

The big-match starting role that has eluded him is not one to cower about.

"Without wishing to be pretentious, it's been among my long-term objectives," Fickou said, according to lequipe.fr.

"When I was called up for the under-20 team, I was hoping to get into the France XV. But I wasn't thinking it would happen to me at 18 years old. I've had this chance but I've worked for it."

France only scraped a narrow and unconvincing win over Scotland last time out, a performance that suggests victory of any sort against Ireland may be beyond them.

"He is in form, he has speed," Saint-Andre said. "We need to see his talent expressed from the start with a true challenge alongside Mathieu Bastareaud and against two great Ireland centres. We have confidence in him.

"It's a logical step with relation to the squad and the work he has done. Attacking-wise, he can bring us very interesting solutions because of his speed, his youth and his audacity."

Fly-half Plisson is, like Mach, dropped from the match 23.

Plisson makes way for Tales, but Saint-Andre said: "This isn't a punishment for Jules, but more of a strategic decision for the Ireland match."

As anticipated, hooker Szarzewski and back-rower Picamoles return to the pack, the latter at flanker rather than in his usual number eight role as Damien Chouly keeps his place. 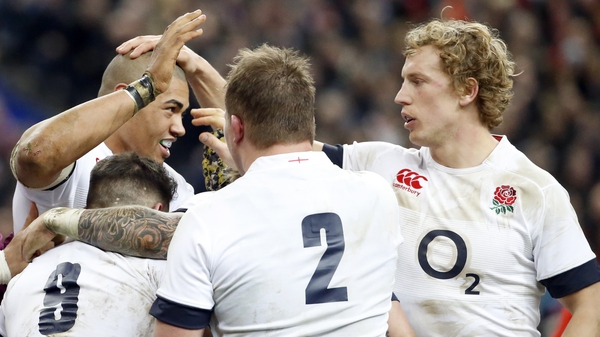