Sports psychologist Enda McNulty can help Ireland belie the weight of history and shrug off "superstition" to claim the RBS 6 Nations title in Paris on Saturday, according to Joe Schmidt.

Now the head coach believes McNulty's "mind fitness" work can spur Ireland to just their second victory in France in 43 years, and their first Six Nations title since 2009.

"I'm not smart enough to be a sports psychologist, so I rely on other people doing the mind fitness," said Schmidt.

"And Enda McNulty has been a good addition over the last little while, from before my time, to help guys stay on track and make sure that they are just process-focused and just game-focused."

Ireland head to France on Saturday knowing any margin of victory ought to be enough to secure the Six Nations crown, given their plus-81 points difference after the 46-7 hammering of Italy.

Ireland's last victory in Paris came in 2000 when Brian O'Driscoll announced himself to the world with a stunning hat-trick.

"I'm not a big believer in superstition" - Joe Schmidt

The new Test appearance world-record holder will notch his 141st and final international bow this weekend, fresh from inspiring that Italy romp by setting up three of Ireland's seven tries.

Schmidt hopes his experiences as backs coach at Top 14 giants Clermont Auvergne between 2007 and 2010 can help shape Ireland's approach against France on Saturday.

Clermont's luckless 10 finals had locals talking of a curse that damned the Massif Central side never to lift the Bouclier de Brennus, the Top 14 shield.

Schmidt rejected such "superstition" back in 2010, and with the help of McNulty is now aiming to drive Ireland past their Parisian mental block.

"Thankfully in my last year we won the Bouclier de Brennus, but one of the things that they talked often about in France is this 'malediction', this bad luck that was always going to haunt the Clermont team whenever they got to a final," said Schmidt.

"And that's why they didn't win 10 of them before they did. I'm not a big believer in superstition.

"I would describe it as the 'pensee de parasite', it's a parasite of thinking that is a distraction, and it erodes the logical mainstream thinking about what you actually need to deliver on the field.

"I don't think we can get too distracted by the history or by the results, or by the points differential.

"Regardless of what does happen we will be very much focused on trying to put in the best performance we can.

"To be honest we could go to Paris and finish third. But if we can win a Six Nations having gone away to England and France, that would be a bit special."

Ulster wing Tommy Bowe will train with Ireland on Monday as he continues his return from long-term groin trouble.

Schmidt said Ireland's coaches are "very open-minded about selection" but conceded it could be tough for the 30-year-old to force his way into the squad for Saturday's title-decider.

"The players are conscious selection is based on training and games, and the guys who are performing in games are training very, very hard.

"They are not trying to leave any door open at all, and if that continues then they've got the jersey at the moment."

Cian Healy suffered ankle problems in the Italy victory, with Ireland's medics advising the Leinster prop spend Saturday night with his foot in a compression boot.

The 26-year-old remains a doubt for the Paris clash, but has already shown signs of improvement in the early stages of his recovery. 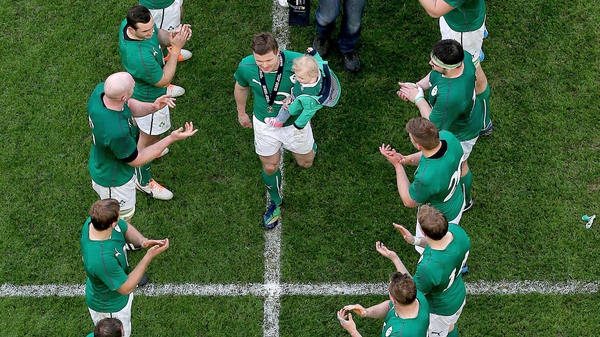