Man of the match Brian O’Driscoll has urged Ireland to repeat the heroics of Paris in 2000 in order to claim a Six Nations championship.

Ireland beat Italy 46-7 in the Leinster centre’s last international appearance in Dublin, and their superior points difference means any win in France next week would almost certainly clinch the Six Nations title.

Ireland's last win away win against France came 14 years ago, courtesy of an O'Driscoll hat-trick.

O’Driscoll, who was replaced after 62 minutes, told RTÉ Sport: "There’s a championship in this team, we need to go to France with huge positivity and try and relive what happened back in 2000.

"It's one thing playing in this jersey but it's another thing altogether winning in this jersey. We've build a big standard with this crop of players, capable of doing big things and we have to start that next week and win ourselves a second championship."

A slightly embarrassed O’Driscoll, who set a new international caps record of 140, added: “I haven’t really let myself think about [the send-off], it's emotional, you know. It’s been a huge part of my whole adult life and to leave here, it's going to be hard, but it’s a good way to leave it and hopefully we set ourselves up for next week.

“I feel humbled by the reaction today, It seems a bit of a joke when you get man of the match for 60 minutes. I‘ve loved my time playing in this jersey.

"Unfortunately, it does have to come to an end at some stage. I'm glad I'm able to go out at home with a big win.

“We work hard at set plays and I’m glad a few of them came off today and 'Sexto' got in for a couple of tries, if it wasn’t for [today's occasion] that man would have been man of the match.” 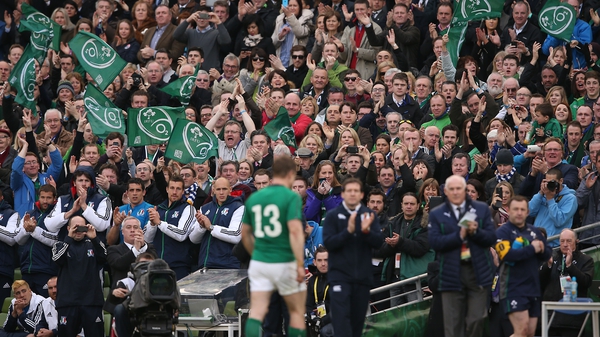