Brian O’Driscoll insists that Ireland must improve on their performance against England ahead of Saturday’s RBS 6 Nations clash with Italy at the Aviva Stadium.

“When you look back on it and pull it apart, I think we have a lot to improve on,” said O’Driscoll.

“Definitely our defence, and our one-on-one tackling, needs to be more accurate.

“Our tackle completion needs to be over 90%. When it slips below that it gets hard to win Test matches.”

With four teams tied on two wins apiece going into round four of the Six Nations, O’Driscoll rejected the notion that Ireland will go into the tie with Italy looking to put up a cricket score, and said the game is first and foremost about winning by any margin.

He said: “You have to think about the processes and about being clinical in finishing our opportunities.

“And if that means that the Italian team we face has a brilliant day, then that means getting across the line.

“We’ve got too much respect for them. And in last year’s result they won the game and deserved the win.

“They are capable of beating anyone in the championship, and England are the only team they haven’t beaten in the Six Nations.

"So, we’re absolutely aware that they’re a team very much on the up. We’ll have our work cut out to contain them and beat them.”

“Coaching really isn’t on my to-do list at the moment. I’ll let the next phase of life happen” - Brian O'Driscoll

The Clontarf man also highlighted that for Ireland to continue to develop as a rugby nation, increasing playing numbers is key, and that the top tier of the game in the country now has far better strength in depth than in previous years.

He said: “We need as many numbers playing the game as possible.

“We need competition for places; I think we’re in a much better place from that point of view, where you can make more of a seamless transition, where guys pick up injuries or have a loss of form and replacements come in.

“In the past, the first 15 or 20, 22 were strong, but thereafter not as strong. I don’t think that’s the case anymore. I think there are 30-35 very good players that can come in seamlessly into the green jersey.

“If we can keep growing those numbers it will only be good for the game and enhance that.”

Coaching not on 'to-do list'
When asked about how he would like to be remembered, O’Driscoll was keen to say, “as a team player”.

“Someone who was about winning as a collective,” he continued. “That’s why we play a team sport, because we enjoy the camaraderie of winning and sharing the disappointment of defeat.

“We all share the responsibility of losses, but to share the victories, namely [the Grand Slam] in 2009, with guys that you soldiered with for a lot of years, brings a lot of satisfaction.”

As for coaching, for the moment, it’s not something he plans to do.

“Coaching really isn’t on my to-do list at the moment,” said O’Driscoll. “I’ll let the next phase of life happen and there might be a chance to come back to it.”

He was also keen to praise his long-term partner in midfield, Gordon D’Arcy, who along with O'Driscoll makes up the most capped centre pairing in the history of international rugby.

“We’ve a good ability to read what one another are thinking,” said O’Driscoll.

“And have a lot of comfort in being beside one another, and in a lot of new centre partnerships you need communication to be a huge aspect.

“With us, there’s an understanding that I don’t have with lots of other people. I’ve been there with him lots of times. I know what he’s doing.

“There’s a lot of trust there also from a defensive point of view.

“He’s a dream to defend with, because you know he’s going to make his tackles. I remember one missed tackle, in his entire career, that was costly.

“He’s been an exceptional defender, and I’ve just really enjoyed playing with him. I feel as though we’ve got a good relationship that can cause people trouble.

Jackson ready if needed
In terms of Paddy Jackson potentially starting in place of Johnny Sexton this weekend at outhalf, O’Driscoll believes the Ulster man is more than ready to slot into the starting XV.

“I played with Jacko last year and I think he’s played really well in the first half of the season for his province,” said O’Driscoll.

“He deserves his chance, albeit he is playing behind one of the best 10s in the world.

“If he gets his opportunity he has his own qualities that he bring to a game as well, so certainly if the situation arose [that Sexton was not fit to face Italy] we are lucky that we have strength in depth at outhalf.”

There has been some talk in the media of late of bringing Sexton back to an Irish province from Racing Métro for the 2014/2015 season, and while O’Driscoll didn’t want to speak out of turn about this possibility he did say it would do no harm to Irish rugby.

“He’s contracted to Racing and I think it would be disrespectful to them to say that we’re looking to take him away from them,” said O’Driscoll.

“I think everyone is in agreement that we didn’t want to see him go, and if a situation arose where he did come back and some agreement was made, well I don’t see that as being possibly a negative.

“I know that he’d be welcomed back into the provincial fold and I know the national management would like to control his game time a little bit more than they currently can.”

Live television coverage of the RBS 6 Nations from 13:30 on Saturday 8 March (Ireland v Italy and Scotland v France) on RTÉ Two and RTE.ie (Ireland only). 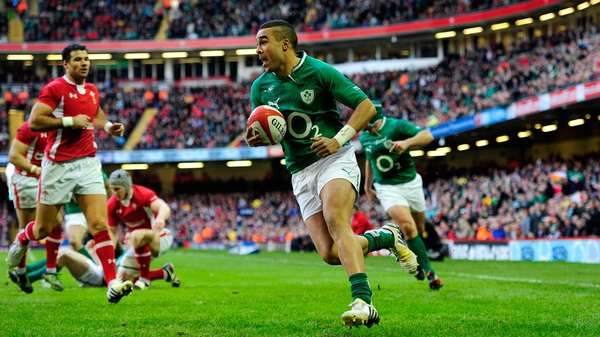 Simon Zebo in but no Tommy Bowe for Ireland squad