Ireland Women kept their Six Nations title aspirations on track with a 14-6 win over Wales in Ashbourne.

Philip Doyle's side trailed 6-3 at the break in difficult conditions but fought back and Heather O'Brien scored the second-half try that made the difference.

It makes it two wins from two for Ireland as they look to repeat last year's historic Grand Slam success.

Although major challenges against the likes of England, Italy and France await them in the coming weeks, there is reason for Ireland to be pleased with their travails so far, and the fact that they have yet to concede a try is testament to the way they have been going about their business.

They were also required to dig deep throughout this contest, and showed that they are more than capable of grinding out a result.

The defending champions had achieved a record-breaking 59-0 success over the Tartan Army in the same venue a week ago, but right from the word go at Milltown House, it was clear that this was going to be a much tougher assignment for Doyle’s side.

The hosts did start with a similar vigour to their facile opening round success, with Claire Molloy, Nora Stapleton and Alison Miller all featuring prominently during promising early passages, but they were encountering a Welsh outfit who were performing their defensive duties in a meticulous fashion.

Indeed, having weathered the early Irish storm, Wales were starting to create several inroads through the opposition rearguard, and a bout of indiscipline eventually presented Llandaff North centre Robyn Wilkins with an opportunity to open the scoring from a close-range penalty 17 minutes in.

This kick at goal was from an awkward left-hand angle, but the Welsh No 13 negotiated the kick perfectly, and following her second successful three-point effort from a similar position eight minutes later, the visitors had developed a six-point platform.

Having made such a promising start to the proceedings, Ireland had found themselves pegged back by a team that were desperate to atone for their narrow defeat at home to Italy last week, and despite enjoying plenty of possession towards the end of the half, the wet and windy was making it difficult for Ireland to execute their customary brand of attacking rugby.

The Welsh rearguard were certainly aware of the threat was opposed by the Irish attack, and they continued to frustrate as the second-quarter on.

However, Ireland did manage to reap some form of reward for their endeavours, and thanks to an expertly-converted place-kick by returning full-back Niamh Briggs one minute before the interval, they had reduced their deficit to a manageable three points (6-3) by the mid-way stage.

In fact, there was a sense that Briggs’ opener could prove to be a crucial moment in the game, and following a lengthy spell of dominance in the Wales ‘22’, the UL Bohs star cancelled out the Welsh lead with a second routine penalty on 50 minutes, after Lowri Harries had been penalised for a high-tackle on Richmond’s Lynne Cantwell.

During Harries’ time in the sin-bin, Ireland continued to dominate possession, and with momentum very much on their side, they were ready to turn the tie on its head.

The pivotal moment of the game then arrived just past the hour mark, when a scrum close to the Welsh line provided Ireland with an ideal platform to forge their one and only try of the evening, as Munster's Heather O’Brien displayed great initiative to gather the loose possession, before driving over forcefully in the right-corner.

Briggs was wide of the mark from a tricky bonus kick, but with Wales showing little sign of attacking intent in the second period, Ireland were never in danger of letting their lead slip. Ireland were perilously close to crossing the whitewash for a second time in the dying embers of the game, but it made little difference to the final outcome, and when Briggs superbly split the posts from the 22-metre-line deep into stoppage time, their seventh consecutive Six Nations victory was secured. 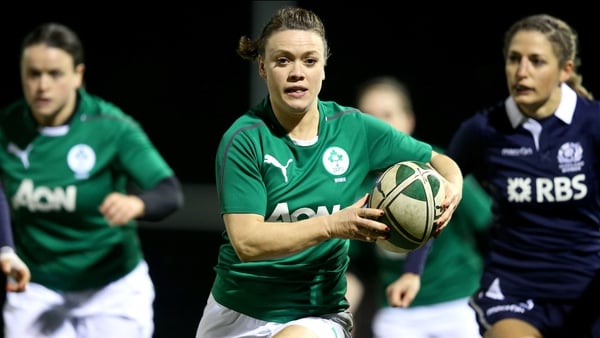