Chris Henry will stick to his ball-stealing strengths in his bid to offset the loss of "world-class" Sean O'Brien to Ireland's RBS 6 Nations campaign.

The Ulster flanker admitted any team would miss Leinster's wrecking-ball loose-forward O'Brien, who may not play again this season after shoulder surgery.

Henry slotted into Ireland's back-row alongside Jamie Heaslip and Peter O'Mahony for Sunday's 28-6 Scotland victory, and is expected to start against Wales this weekend.

The 29-year-old said he will not try to mimic O'Brien's rampaging style, favouring his natural breakdown abilities instead, especially against two of the finest turnover hunters in Sam Warburton and Dan Lydiate.

"There's always going to be a lot of talk about Sean not being there, he's one of the best in the world," said Henry.

"The only way I can approach it is to say, 'yes he's an unbelievable player, but I have to think maybe I can add something a little bit different, maybe there are certain aspects of the game I can bring that he can't'.

"Rugby's horrible in that way when people get injured when you get your opportunity.

"So for me, I certainly tried to give everything out there last week.

"Hopefully that can be enough to stay in the side, but we'll just have to wait and see."

Henry believes Saturday's Wales clash could be completely dominated by the breakdown battle.

Unless Ireland "blast out" captain Warburton and fellow scavenger Lydiate, they will struggle for control, he admitted.

The Ulsterman remains Ireland's premier turnover specialist though, and is confident Joe Schmidt's side have enough prowess over the ball to cope with Wales' approach.

"Whatever back-row the Welsh team put out we already know they are world-class," said Henry.

"Their big thing is on defence and how quickly they get onto the poach, taking one tackler low and the other in position to get a solid threat in there.

"It's going to be something that we have to anticipate, get in there early and do a good job of blasting them out.

"I certainly tried to give everything out there last week. Hopefully that can be enough to stay in the side, but we'll just have to wait and see"

"Warburton's probably one of the best in the business, so we've got to be on the money.

"Starting off with a win and to play alongside the likes of Jamie and Peter was fantastic.

"They are both class players, and they are strong on the ball as well.

"Will that performance from last week be enough to beat this Welsh team? Probably not, but we're pretty realistic, we know that, we're a bit fed up with an Irish team that performs one week and then doesn't perform the next.

"As a group of players we want to put that to bed, deliver performances every week and get results every week."

Ireland's coaches have made a big play of highlighting their exemplary disciplinary record heading into the Six Nations in a bid to stay on the right side of the officials.

Henry believes Ireland's "clean" approach is worthy of mention, but admitted one of the biggest challenges in this campaign is to roll away quickly enough after a tackle.

"If you want to win big games you've got to make smart decisions and keep the penalty count low," he said.

"I try to leave the talking to the captain, because referees won't like you chirping too much, that's something I've tried to work on!

"The big thing now is to make sure you move after a tackle.

"A lot of penalties were given last week for the tackler not rolling away.

"Sometimes it's very hard if you're tackling in a certain position, it's nearly impossible to get out of there – but that's your responsibility as the tackler.

"So for me personally that's something I've tried to work on, so if I make a tackle I can get out of there quickly.

"I think on the whole we were pretty clean last week, and we want to be a clean and honest team." 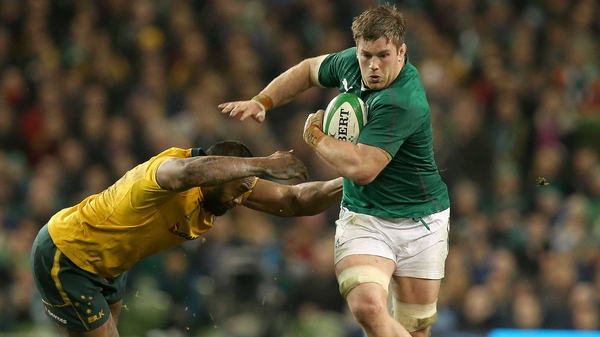