'Blade Runner' Oscar Pistorius backed Paul McGinley's claims to take over as Europe's Ryder Cup captain after playing alongside the Dubliner in the first round of the Dunhill Links pro-am.

Jose Maria Olazabal stepped down as skipper after leading his team to victory over United States in the biennial team event in Chicago last Sunday and McGinley has been tipped as the Spaniard's successor for the 2014 Ryder Cup in Scotland.

"During our round I thought he would make a great leader for the European team," Pistorius told Reuters in an interview after McGinley had carded a four-over-par 76 at Carnoustie.

"More than once after I played a poor shot he came over and gave me encouragement and he also gave me a couple of tips when I was feeling nervous.

"I think he would be a great mentor at a Ryder Cup. He was very patient with me."

In August, Pistorius became the first double amputee to feature in an Olympic Games and he also won two gold medals and a silver in the London Paralympics that followed.

McGinley holed the winning putt for Europe at the 2002 Ryder Cup and was an assistant captain to Colin Montgomerie in Wales two years ago and to Olazabal last week.

The South African said that before Thursday's round he did not know quite what to expect from McGinley who scored his biggest victory as a player when he won the Volvo Masters at Valderrama, Spain in 2005.

"But when I started talking about him to a couple of players they all said what a great guy he is," said Pistorius.

"I think when so many other people think that way, it's the biggest compliment you can pay him."

Pistorius has a handicap of 21 in South Africa and is struggling to cope this week after being forced to play off 18.

On the second hole at one of the toughest courses used to stage the British Open, he made a birdie after hitting a chip to within two yards of the flag.

"After that I hit a couple of good shots but my putting let me down," said Pistorius after he and McGinley finished way down the leaderboard in the team event on 74. 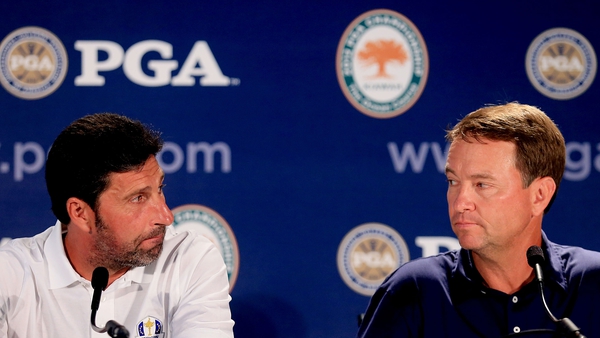