Europe claimed their third consecutive Ryder Cup with an outstanding display of golf in an 18.5 to 9.5 victory at an emotionally charged K Club in Kildare this afternoon.

Leading the USA 10-6 overnight, Ian Woosnam's side easily collected the four-and-a-half points they needed to seal victory in front of an amazing 40,000 plus fans at the sun-drenched Straffan course.

As they celebrated in front of an ecstatic home crowd, who had cheered them every step of the way no matter what the weather, Darren Clarke was for obvious reasons the number one toast of everybody.

The fifth European win in six matches and, for the first time ever, a third in a row - by an incredible nine-point margin that matched their record of two years ago - came not just with tears of joy, but inevitably tears of sadness as well.

Clarke, who lost his wife Heather to cancer just six weeks ago, was hugged by everybody who could get close to him after a remarkable display in which he won all his three games.

'This is as good as it gets,' said Clarke, crying his eyes out as he savoured the victory. 'The support I've had is something I will cherish forever. I've too many memories to list. It's done a lot for me. A lot of people how showed how much they care for me and cared for Heather.

'I was just trying to keep my emotions in check all the way round. The fans have been fantastic and the American players and their wives have been incredible too.'

The only thing that could have made it any better in Ireland's first staging of a contest which now grips the sporting world was if Clarke had holed the winning putt. For much of the final day it looked as if that dream scenario could happen.

But the Ulsterman's team-mates denied him - unintentionally, of course - the ultimate glory because they were simply too good.

As Clarke was heading to a superb three and two victory over Zach Johnson, Swedish rookie Henrik Stenson, playing in the following match, was the man actually to send the United States to yet another defeat.

Colin Montgomerie, Paul Casey, David Howell and Luke Donald had already taken Europe to the 14 points they needed to retain the trophy by then.

Stenson had no idea as he polished off Vaughn Taylor four and three that his was the putt that meant Europe's amazing run of success went on.

Padraig Harrington, who was last to tee off, eventually went down four and three to Scott Verplank, who matched Casey's hole-in-one on the par-three 14 yesterday en route to victory.

Meanwhile, Tiger Woods (three and two over Robert Karlsson) and Stuart Cink (four and three over Sergio Garcia) scored the USA's only other points on a disappointing day for the visitors. 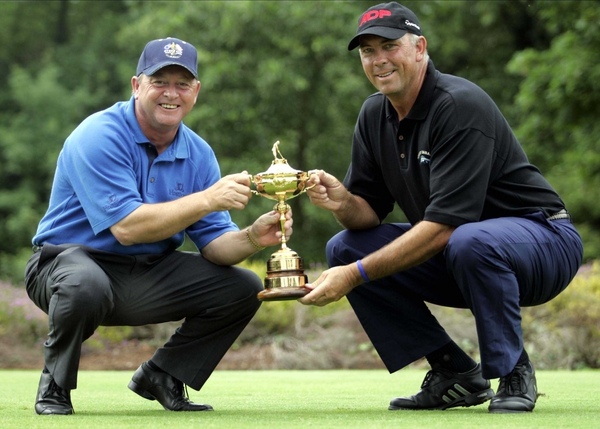