Munster head coach Graham Rowntree was "gutted" not to have beaten Toulouse but is looking forward to seeing his side tackle the Cell C Sharks on the road in the Heineken Champions Cup last 16.

A narrow 20-16 defeat to five-time European champions Toulouse means Munster will travel to South Africa to face the Sharks in the knockout stages following the Six Nations.

Rowntree’s men have already beaten three South African sides at home this season – Vodacom Bulls and Emirates Lions in the BKT United Rugby Championship as well as South Africa 'A' – and will head to King’s Park in Durban on the weekend of 31 March-2 April.

They will also return to South Africa for the final two rounds of the URC when they meet reigning champions the Stormers on April 15 and then clash once again with the Sharks seven days later.

Rowntree said: "If you’re going to win this competition, you’ve got to go places and win games like this.

"What we are proving is that we’ve got form on the road, so I’m already looking forward to it. It’s a challenge, but we like a challenge at this club.

"We’re going to be seeing a lot of them [the Sharks]. And to me, what makes a class team is what you do on the road.

"We’ve had a couple of good moments there recently, in Edinburgh and Ulster. I’m gutted about today in Toulouse because it would have been a nice feather in the cap."

Having lost to Toulouse by five points in the first meetings, Munster got even closer at Stade Ernest Wallon and could have emerged with a draw if Joey Carbery had managed to convert tries from John Hodnett and Tadhg Beirne.

Toulouse only scored one try themselves, Juan Cruz Mallia touching down early on, but 15 points from the boot of full-back Melvyn Jaminet saw them to victory and a home match with the Bulls in the last 16.

"Not many teams come here and do what we did, recover from an early setback and find a way to stay in the game. We'll have a look at some things we can do better," said Rowntree.

"We’re tough to beat – that’s the bedrock of what I want us to be in terms of our DNA. I’m really pleased with how we’re going."

Jerome Kaino, the Toulouse skills coach, was as much relieved as pleased to have seen his side win the game, but he always knew it was going to be a close-run affair.

"The history of the games between these two teams shows there have never been any blow-outs. So, to get the win against a very good Munster side was pretty pleasing, said Kaino.

"We started well but weren’t able to capitalise on our momentum. We’re just happy to have secured a home tie against the Bulls and it will be a different brand of rugby to adapt to against them."

Watch Leinster v Cardiff in the BKT United Rugby Championship live on RTÉ2 and RTÉ Player on Saturday from 4.30pm 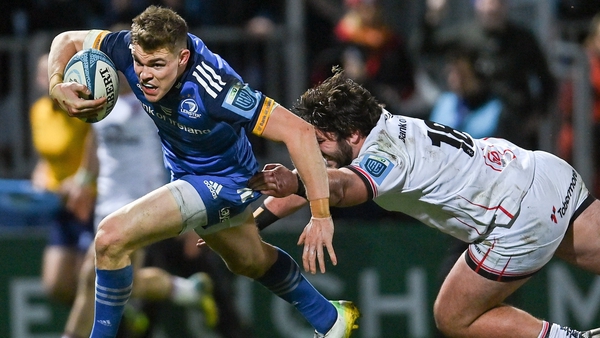