There is plenty at stake for all four Irish provinces heading into the final round of pool fixtures in the Heineken Champions Cup and Challenge Cup.

Leinster have already qualified for the Champions Cup knockout stages but can secure home advantage for the round of 16 and beyond with victory over Racing 92 at the Aviva Stadium on Saturday.

Munster look set to join Leinster in the last 16 and could even clinch a home match in the next round, depending on how they fare against five-time winners Toulouse on Sunday, while Ulster also remain in contention despite losing all three pool matches to date. They host Sale Sharks in Belfast on Saturday.

Connacht are guaranteed a spot in the Challenge Cup knockouts and travel to Newcastle on Saturday knowing a positive result will ensure they are playing at the Sportsground in the next round.

ONLINE
Follow our live blogs on rte.ie/sport and the RTÉ News app with match reports and reaction from around the grounds.

WEATHER
Conditions look ideal for Leinster's meeting with Racing 92 at the Aviva Stadium, where temperatures of around 8C are forecast. There is the chance of the odd rain shower, though.

It should also be dry for Ulster’s evening kick-off with Sale Sharks at Kingspan Stadium, with temperatures of around 7C and a moderate southerly breeze.

Colder conditions are predicted for Connacht’s trip to Kingston Park to face Newcastle Falcons. There will be a real feel of -3C come kick-off.

It will also be chilly at Stade Ernest Wallon for Toulouse’s game with Munster. A high of 3C is forecast with winds of up to 30km/h.

Leinster are the only side to have taken maximum points from their first three pool matches, while they also top the charts for tries scored (22) and fewest conceded (3).

It is 15 wins from 15 games in all competitions this season for Leo Cullen’s men, who were far too strong for Gloucester last weekend despite some struggles at the set-piece and wasteful visits to the opposition 22.

Leinster’s in-form centre Jamie Osborne, who was named in Ireland's Six Nations squad, beat the most defenders in round three (8), while Caelan Doris leads the try assist charts (5) after creating another two at Kingsholm.

Racing’s form fell off a cliff following their 42-10 defeat to Leinster in round one. Having entered that game on a five-game winning streak, they then went five games without a victory.

The Parisians broke that winless run in crazy fashion against Harlequins, Nolann Le Garrec’s 77th-minute penalty snatching a 30-29 success despite Racing having only 12 men on the pitch for the closing stages.

That win kept them alive in the Champions Cup and they have named a strong line-up for their trip to Dublin, with Finn Russell retained at out-half. The Scotland international conceded five turnovers and was sin-binned against Quins, although Racing won three of his seven restarts.

After three last-gasp losses in as many weeks, and six defeats in their last seven matches, Ulster’s season is plunging into crisis. Yet they still have a chance of reaching the Champions Cup knockouts.

Should Clermont Auvernge lose away to the DHL Stormers earlier on Saturday, an Ulster victory over Sale will be enough to book their place in the next round.

There will need to be major improvements in attack if Ulster are to return to winning ways. They have made the fewest metres in the Champions Cup (577), beaten the fewest defenders (25), made the fewest clean breaks (three) and are the lowest offloaders (8).

Having been omitted for Ulster's heartbreaking loss in La Rochelle, Ireland pair James Hume and Stuart McCloskey are restored to the midfield, where they will be tasked with limiting Manu Tuilagi's influence. Billy Burns is also back at out-half but Iain Henderson missed out due to concussion so academy back row Harry Sheridan makes his full debut.

Sale stuffed Ulster 39-0 in round one but back-to-back losses to Toulouse means they are also in must-win territory. Just two points separate the sides in Pool B, Ulster having closed the gap thanks to the three bonus points they collected against La Rochelle.

Munster could find themselves through to the last 16 before they run onto the pitch at Stade Ernest Wallon for the penultimate match of the pool stages.

If any of Clermont Auvergne, Montpellier or Sale Sharks are beaten, Munster’s passage to the next round will be confirmed. The focus would then shift to trying to secure a home tie.

Toulouse and Munster have become familiar foes of late. This will be their fourth meeting in three seasons, with Toulouse targeting a clean sweep of victories. Last season’s quarter-final was technically a draw but the French side still progressed after winning the place-kicking competition.

Toulouse emerged victorious from the Thomond Park fog in December when the power of their pack, coupled with Antoine Dupont’s game-management, saw them come from behind to win 18-13.

Toulouse are strong favourites to make it four wins from four and potentially top Pool B, but Munster are a side growing in confidence and travel to France on the back of three successive wins over Ulster, Emirates Lions and Northampton.

Connacht’s quest for a home tie in the next round of the Challenge Cup was made easier by Bristol Bears being docked five points for fielding an ineligible player.

It means a losing bonus point will be enough to ensure Andy Friend’s side are back at the Sportsground for their last-16 tie.

Connacht have won all three pool matches while Newcastle have zero points to their name after three successive defeats. However, the ludicrous format of the pool stages means the Falcons could yet qualify for the knockout stages.

With that in mind, Newcastle have named a strong line-up that includes Argentina flier Mateo Carreras, who is the leading tryscorer in the English Premiership with 11, as well as fellow Puma Matias Orlando and England international hooker Jamie Blamire.

Watch Leinster v Racing 92 in the Champions Cup on Saturday from 2.30pm on RTÉ2 and RTE Player with live blog on RTÉ.ie/Sport and the RTÉ News app. Listen to live commentary on Saturday Sport on RTÉ Radio 1. 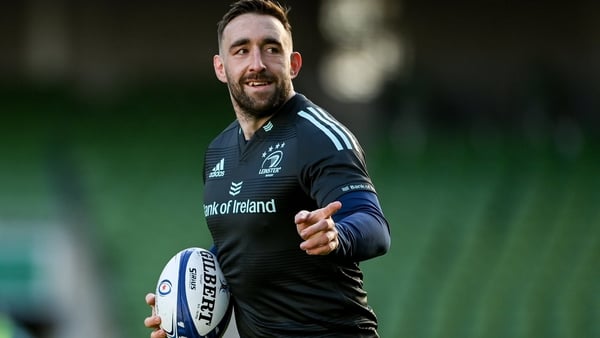