Bernard Jackman believes Joey Carbery's omission from Ireland's squad for the opening rounds of the Guinness Six Nations is a "real statement" but feels including four rather than just three out-halves should have been considered.

Head coach Andy Farrell revealed his 37-player group on Thursday and the absence of Munster's Carbery was the most notable absentee at the start of a World Cup year, with his provincial team-mate Jack Crowley and Leinster's Ross Byrne picked ahead of him as back-ups for Johnny Sexton.

Speaking on RTÉ's Game On, Jackman said Carbery's recent form did not appear to be an obvious issue.

"It's a big shock for me because, let's be honest, Joey has been picked by Farrell pretty much regardless of being in top form consistently and I don't think his form has been that bad to be honest but it's a real statement by Farrell that Crowley has got in ahead of him," he said.

"(Crowley) has been playing a little bit at 12 whereas Joey has been at 10 when he's been there. Ross Byrne has taken the opportunity with Johnny being out and taken it with two hands and being part of a very good Leinster team over the last 5-6 weeks.

"I don't know why (Farrell) didn't just pick four 10s for this squad and leave Joey in. The only reason you would leave him out is if you feel he needs a bit of a kick up the bum and see what he's like under pressure."

Jackman said Carbery would still have time to prove his credentials for this coming autumn's World Cup squad with some eye-catching performances between now and then.

Jackman also felt there were some "contradictions" in the squad in regard to whether players are being selected on form or not.

"This squad is a little bit perplexing in that you can't say you're leaving Joey Carbery out on form and then you pick Keith Earls, Conor Murray (and) Bundee Aki. That's the issue," he said.

Jackman pointed to Ulster wing Jacob Stockdale as an example of a player in the squad despite "terrible" provincial form in recent times.

"This squad certainly there's question marks around form and in a key position like out half. We've invested 7-8 years in Joey to be the next best to Johnny," he said.

"I just think the fact that Johnny hasn't played for the last 3-4 weeks - and I know he's fine - I don't see the benefit of leaving Joey out of this large group now unless you want a reaction from him."

Watch Leinster v Racing 92 in the Champions Cup on Saturday from 2.30pm on RTÉ2 and RTE Player with live blog on RTÉ.ie/Sport and the RTÉ News app. Listen to live commentary on Saturday Sport on RTÉ Radio 1. 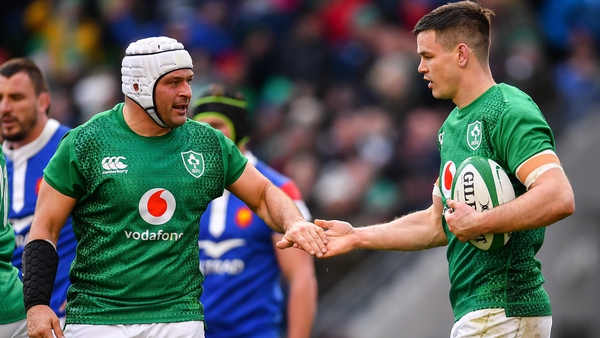