Carbery's omission was the big surprise when Farrell revealed his 37-man squad for the opening rounds of the Guinness Six Nations this morning, with Ross Byrne and Jack Crowley included alongside captain Johnny Sexton as the out-half options.

"With Joey, I think initially your gut would be surprised because you've seen him there so many times, but when you step back and look at the merit of selection I don't think it's a surprise. I think it's a very fair selection at that position," Heaslip told the RTÉ Rugby podcast.

The former Ireland number 8 was speaking at the launch of RTÉ Sport's coverage of the 2023 Six Nations, where he was joined by former Ireland women's out-half Hannah Tyrrell.

And Tyrrell says while Carbery's absence from the squad did come as a surprise initially, it's a fair decision by the Irish coaches.

"It [the surprise] comes off the back of every squad over the last couple of years, where when Joey has been available he's been selected, but we don't really know Andy Farrell's thinking yet, or the discussion he had with Joey Carbery, he just feels like Ross Byrne is giving him something a little bit extra right now.

"Jack Crowley is the new kid on the block who is learning his trade and can do with a couple of extra minutes, and I think he could be a really good impact off the bench."

And with Carbery now set to feature in Munster's trip to Toulouse on Sunday, as well as their visit to Benetton in the URC on Friday, 27 January, she believes he has the opportunity to prove a point to Farrell.

"Sport is all about adapting to what's put in front of you. Joey would have been looking forward to this Six Nations and playing a part, and he may well yet, we're not sure.

"For him, his focus right now will be Munster and getting some minutes and he'll absolutely be looking to it in some big performances and show Andy Farrell what he can do," she added.

With just two caps to Crowley's name and Byrne having just 10 minutes of Test rugby since February 2021, Heaslip believes Farrell is also using this Six Nations as an opportunity to develop his options below captain Sexton.

"Joey's been given 40-odd caps, he's been with Munster since 2018. I know he's had injuries along the way, and playing under a coaching regime before [Graham] Rowntree that didn't suit his game, but I don't think you're going to learn a whole lot more from having Joey in the squad now.

"If you're Andy Farrell, you're sitting there, 'we need to make sure we have plenty of actual starting options at 10'.

"Ross hasn't really got a lot of time with Ireland, but he's doing it week-in week-out with Leinster, he's been doing really, really well and stepped up in November. We know Ross can run this backline and this team well, and can be organised and command that respect, let's reward him for that.

"Jack is exciting, an exciting talent and prospect and we can further our depth in that position potentially.

"There's nothing stopping him parachuting Joey in, and I wouldn't be surprised if Joey gets a little bit of exposure in camp.

"I think he's further increasing his depth in that position, giving vital minutes to players that need it coming into a World Cup year, rewarding form which is reinforcing the internal competition, making sure everyone stays on their toes in camp," he added. 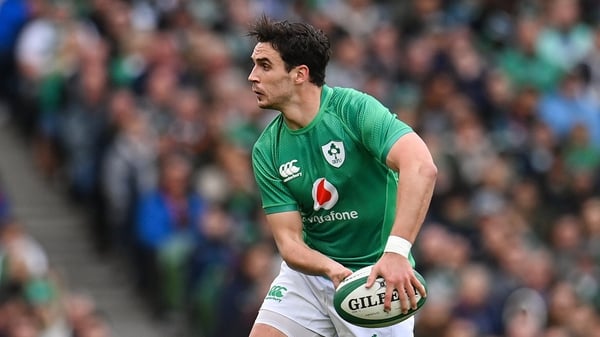