Emerging Ireland got their three-game tour of South Africa up and running this afternoon, with a dominant 54-7 win against a poor Griquas outfit in Bloemfontein.

Emerging Ireland led by 28 points to seven at the break, with Niel Otto scoring the only try of the game for the Griquas, who handed out seven debuts in their matchday 23.

After a cagey opening quarter of an hour, the tourists scored two tries in six minutes to shoot out to a 14-0 lead, as Penny forced his way over from close range, before Baloucone ran in for the second try out wide, Munster's Crowley kicking both conversions.

A yellow card for McCann gave the Currie Cup saw Ireland reduced to 14 men, and they made the Irish side pay on 32 minutes as Otto got in to score.

It would prove to be their only try of the game, as Penny restored the 14-point advantage three minutes later, while loosehead Josh Wycherley grabbed the fourth try on the stroke of half time, and Crowley's conversions ensured a commanding 28-7 lead at the break. 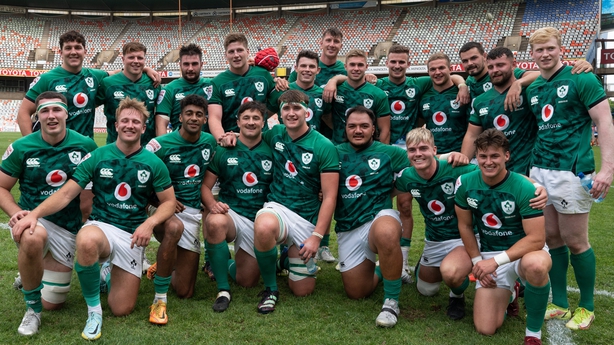 The second half started off slow, before Ulster centre Moore ploughed through a gap in the defence to grab the fifth try on 53 minutes, having been played in by his provincial teammate Blaoucoune, while Daly connected with a Crowley crossfield kick on the hour mark to grab try number six.

With 14 minutes to play, McCann made up for his earlier yellow card by scoring a try, after Joe McCarthy had come close in the build up, while the win was capped off by Munster wing Nash, who ran in unopposed, as Jake Flannery kicked the final conversion.

Up next for Emerging Ireland in their Toyota Challenge series is a meeting with the Currie Cup champion Pumas on Wednesday 5 October.