New Zealand were crowned Rugby Championship winners on the back of a convincing 40-14 victory over Australia in Auckland, as South Africa had to settle for second best despite later beating Argentina.

The All Blacks triumph in their Bledisloe Cup clash had moved them top of the table by five points and with a healthy points difference over the Springboks.

South Africa then faced Argentina in Durban knowing they needed a victory margin of more than 40 points to topple New Zealand.

Despite a strong performance at a sold-out Kings Park, the 38-21 win was not enough to snatch the title on the final day as New Zealand ended the tournament on 19 points, just one ahead of South Africa.

The Springboks capitalised on poor discipline from the Pumas, who received four yellow cards and gave away two penalty tries.

South Africa number eight Jasper Wiese, loose-forward Siya Kolisi and replacement full-back Kurt-Lee Arendse all went over, but it was ultimately not enough to impact on the final standings.

Australia had started the day with a chance of taking the title themselves, but they were unable to repeat the performance of their narrow - and controversial - loss to the All Blacks last week.

Ill-discipline repeatedly undermined the Wallabies' cause at a venue, Eden Park, where they had not won since 1986.

Jed Holloway was sin-binned for a bad tackle on Dalton Papalii with just two minutes on the clock and, although they held out with 14 men initially, they trailed 17-0 by the break.

Richie Mo'unga opened the scoring with a 20th-minute penalty and converted after Will Jordan followed with a fine try.

Australia then conceded a penalty try before half-time after an indiscretion during a rolling maul and Dave Porecki became their second player to be shown a yellow card.

New Zealand tightened their grip in the second half as Sam Whitelock went over from close range and Codie Taylor also crossed. Mo'unga converted one of them and added a penalty.

Australia finally got on the scoreboard through Folau Fainga'a but Samisoni Taukei'aho responded for the All Blacks and Mo'unga landed another penalty. 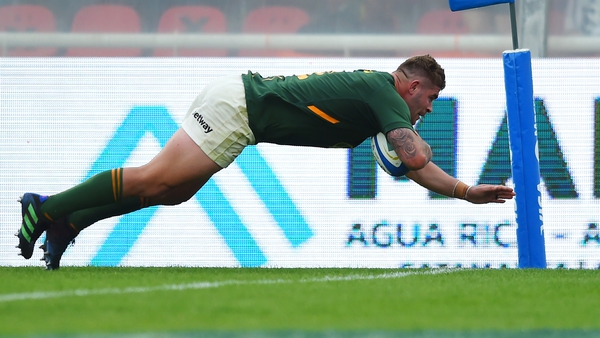