Australia lock Darcy Swain has been suspended for six weeks for a dangerous challenge on Quinn Tupaea, that left the New Zealand centre with a season-ending knee injury and the All Blacks fuming.

Swain, who clattered into Tupaea's extended leg during the 39-37 loss to the All Blacks in Melbourne last week, was shown a yellow card by the referee on the pitch and cited after officials decided the incident met the red-card threshold.

The Judicial Committee Chair, Andre Oosthuizen, said they had decided the incident was "not intentional, however, it was highly reckless".

Wallabies coach Dave Rennie later said Swain had attempted to get in touch with Tupaea after the match to apologise.

"It was clumsy, reckless but there's no malice in that," he told reporters on Thursday.

"Darcy's not happy with the result (of what he did) and he's been punished. Six weeks is a hefty punishment, I reckon, and fitting."

The incident triggered outrage in New Zealand, and Swain was criticised by All Blacks players and staff.

Rennie said he had been equally unhappy by a cleanout on Scott Sio by Fletcher Newell late in the game which resulted in the Wallabies prop sustaining a hamstring injury - an incident for which the All Black went unpunished.

In a timely move on Wednesday, Swain was selected for an Australia A squad that will play three matches against a Japan XV next month.

That will account for half of his ban, leaving him free to play some part in Australia's end-of-season tour of Europe.

The ban means he is not available for this weekend's final Rugby Championship test against the All Blacks in Auckland and he will also miss matches against Scotland on 29 October and France a week later.

He will be available for selection for the clash with Italy on 12 November in Florence, while the Wallabies will face Ireland in Dublin a week later.

"We're keen for a number of those guys to get as much footy as possible leading into a World Cup year, Darcy's still a young lock," Rennie added.

"Unfortunately, he's going to miss a fair bit of footy over the next month or so." 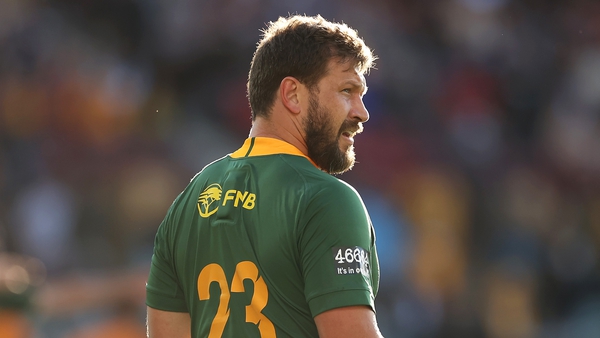