The All Blacks remain unhappy with Wallabies lock Darcy Swain after his "free shot" on Quinn Tupaea in Melbourne last week left the midfielder with a season-ending injury.

Swain was given a yellow card for a dangerous clean-out that forced centre Tupaea off the pitch with a serious knee injury during the All Blacks' 39-37 win on Thursday.

Swain will face a judicial hearing later on Monday and may be slapped with a lengthy ban if found guilty.

All Blacks playmaker Beauden Barrett was asked on Monday if his team had a position on the incident. "We do, we do," he told reporters at a media conference in Auckland.

"I feel for Quinn. He basically didn't see it coming, he was a sitting duck. It was a bit of a free shot. We don't like to see these sorts of injuries."

All Blacks scrumhalf Aaron Smith agreed with his team mate that Swain was culpable.

"Injuries happen in rugby but some can be controlled," he said.

"There was no intention there to injure him the way that he did," Alaalatoa told reporters on Monday.

"I've seen some of his close mates (on the team) just throw the arm around him because he’s probably copping a fair bit on social media at the moment." 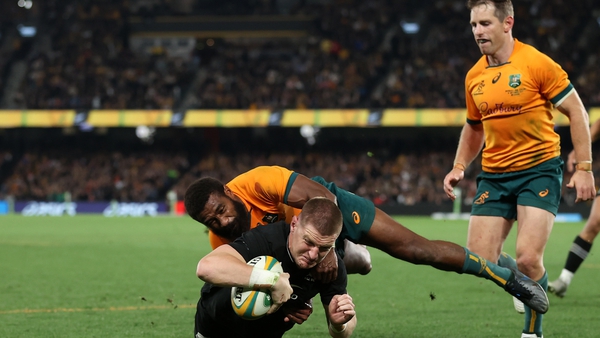