Ireland booked a place in the Rugby World Cup Sevens semi-finals with a convincing 24-14 over hosts South Africa in Cape Town.

After beating the Springboks for the first time ever on the series tour earlier this year, the underdogs were the better side throughout, winning four tries to two to set up a semi-final date with New Zealand tomorrow morning (11.35am, live on RTÉ2 and RTÉ Player).

Coming into the game on the back of a facile 24-0 win over Portugal and an impressive victory over 2013 and 2018 finalists England, James Topping's team were quietly confident of an upset and they took the game to the hosts from the first whistle.

Mark Roche, having overcooked the kick-off, went over for the first try of the game after a fine flowing move, darting over from close range, before adding the extras to make it 7-0.

A minute later and the visitors thought the lead was doubled after pouncing on a South African mistake.

Andrew Smith challenged the retreating defender before touching down on the bouncing ball, but after video consultation, the Irishman was adjudged to have fouled his opponent in contesting for the scrappy ball.

It was nervy stuff from South Africa and they butchered a simple overlap to get off the mark, flinging the ball out of play with the line at their mercy.

The Irish defence was holding firm and in control, albeit they were aided by some poor South African execution.

They appeared to be taking that lead to the break, but in the final play of the half, a lineout malfunction led to a rapid South African break with JC Pretorious pinning the ears back and Muller du Plessis applying the finishing touches.

It would prove a fleeting moment for the home side as Ireland began the second half in similar fashion to the first, quietening the home supporters and punishing the hosts on the scoreboard.

Ireland's second try began and finished with Harry McNulty, the 29-year-old disrupting the South African lineout before powering over from close range a few phases later.

An out-of-sorts South Africa just couldn't find any rhythm and yet another sloppy mistake was punished when an Irish turnover was picked up by Jordan Conroy who darted for the line to extend the advantage to 19-7.

FT Ireland 24-14 South Africa - Ireland are into the semi-finals of the Rugby World Cup Sevens! They slayed the host country with a brilliant performance in Cape Town and will play New Zealand in the last four tomorrow #RTErugby pic.twitter.com/RYDqA93IqD

By this point there was only one team in the contest and after comfortably going from side to side and retaining possession, the ball was slung out to Conroy on the left wing who added to his tally.

There was still time for South Africa to run in a consolation try, but it was joy for Ireland and a place in the last four of the competition, where the other semi-final will see Australia take on Fiji. 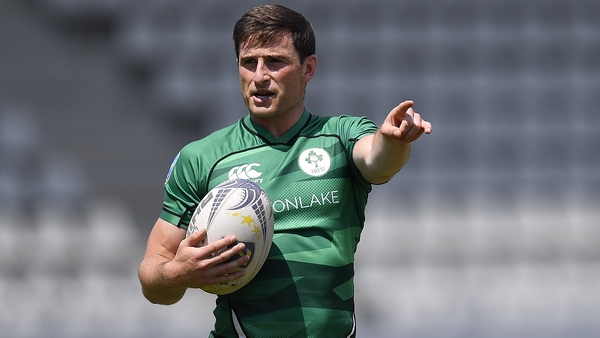