Ireland fell to a 28-0 defeat to reigning champions New Zealand in their Rugby World Cup Sevens quarter-final in Cape Town on Saturday evening.

It was always going to be a tough ask for the Irish, and they made the worst possible start as the Black Ferns ran in for a try in the first minute.

Captain Lucy Mulhall turned over possession with a monster hit as Ireland looked to muster a response, but New Zealand were just too strong.

Portia Woodman's try early in the second half knocked the stuffing out of Ireland, with two more Kiwi tries following, from Alena Saili and Shiray Kaka, to wrap up what was a comfortable victory.

Ireland now go into the 5th-8th place play-offs. They'll face the loser of the France-Fiji quarter-final at 9.40am on Sunday.

On Friday, Amee-Leigh Murphy Crowe crossed for two tries as Ireland ground out a 24-12 victory over Brazil in their opening game.

The 27-year-old, who top-scored in this season's World Series with 36 tries in 34 matches, took less than four minutes to open her account, with Mulhall extending their lead less than a minute later.

A late Brazil surge saw them cut their deficit to 14-12 at half-time but Beibhinn Parsons scored a stunning solo try after the restart to put them back on track. 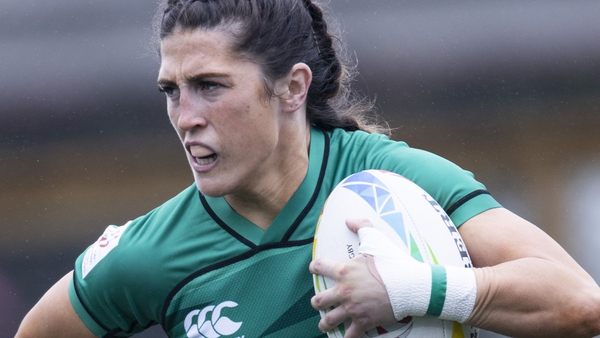