The best performance from this Irish team in several years, although for the first 10 minutes it looked like anything but.

In coming from 15-0 down, Greg McWilliams' side produced their biggest ever comeback, but did so without drama, eventually running in nine tries in a dominant 57-22 win.

Neve Jones joined the illustrious company of Lynne Cantwell, Sophie Spence and Alison Miller, becoming the fourth Irish woman to score a Test hat-trick, all three coming off the back of dominant mauls where she connected with captain Nichola Fryday.

After working under John McKee and Denis Fogarty in recent weeks, the lineout, maul and scrum were the foundation on which Ireland built their game, while the inexperienced backline played with confidence and skill.

Dannah O'Brien ran things from out-half, with the 18-year-old debutant kicking six of her nine conversion attempts, while Aoife Dalton and Méabh Deely also marked their first caps with tries.

Dalton's score gave Ireland their first lead of the game just before half-time, after Jones and Aoife Doyle had earlier brought Ireland back into it.

Leading 19-15 at half-time, Ireland never looked like losing from that point. Jones scored twice more to complete her hattrick, while Chloe Pearse, Molly Scuffil-McCabe and Emma Hooban also ran in late tries to bring Ireland past their half-century.

One of the biggest questions before the game was how Ireland would handle the stifling heat and humidity in Shizuoka, and the early signs were that they were struggling in it.

Within five minutes they found themselves 12-0 down, first being overpowered by the Japanese forwards from close range, before Komachi Imakugi finished off a breakaway move to score the hosts' second try.

Ayasa Otsuka added a penalty on 11 minutes, pushing the scoreboard out to 15-0, which even at that early stage seemed insurmountable in the conditions.

But Ireland settled, and after some good phase-play they forced a penalty on the quarter hour mark, kicking to the 22, with Jones finding Fryday at the lineout, before they mauled the hosts back 20 metres, with Jones touching down to score.

O'Brien reduced the arrears further with the conversion, her first points in Test rugby making it 15-7.

Shortly after, they blew the Japanese defence open, Aoife Doyle running over in the corner to score. The move started in midfield with a dominant scrum, and after gaining a penalty advantage they moved the ball wide.

Enya Breen's show-and-go created the initial space, before she played through Méabh Deely, and the Connacht full-back showed great composure to offload late to Doyle who ran in uncontested.

O'Brien's conversion fell short, Ireland still trailing 15-12, and after surviving a short period of Japanese pressure the tourists struck for a deserved third try just before half-time, 19-year-old Dalton showing great footwork to find a gap in defence from 10 metres out.

Her try gave Ireland their first lead of the game, while O'Brien's conversion extended it to 19-15 as the half-time whistle blew.

The break couldn't halt Ireland's momentum, and within two minutes of the restart they went over for their fourth try in familiar circumstances; Jones finding Nichola Fryday at the lineout, before the hooker touched down for her second try off the back of a powerful maul as Ireland moved 24-15 ahead.

By now, the Irish setpiece was dominating, and when they won a scrum penalty under the posts on 52 minutes, O'Brien pinned a kick to the corner. A third try for Jones almost felt inevitable, and the Gloucester-Hartpury hooker obliged, once again finding Fryday at the lineout, before touching down at the back of the maul.

That try, converted by O'Brien to make it 31-15, killed the game off, and within four minutes they were celebrating their sixth score of the game, Deely played in by a great Enya Breen pass, and the Connacht full-back scorched through the defence to score on her Test debut.

The hosts did manage to pull back a score when Makoto Lavemai powered over following a quick-tap penalty, but Ireland crossed for a seventh try in the 70th minute, replacement prop Chloe Pearse reacting fastest to a blocked kick, as the tourists moved 43-22 in front.

They brought up their 50 shortly after when replacement scrum-half Molly Scuffil-McCabe spotted a gap at the side of a ruck, sprinting through the heart of the Japan defence to dive over beneath the posts, as O'Brien tapped over the extras.

And with the final play of the game Emma Hooban forced her way over, the ninth try of the day converted once again by the debutant O'Brien, the Tullow 10 finishing the day with 12 points to her name. 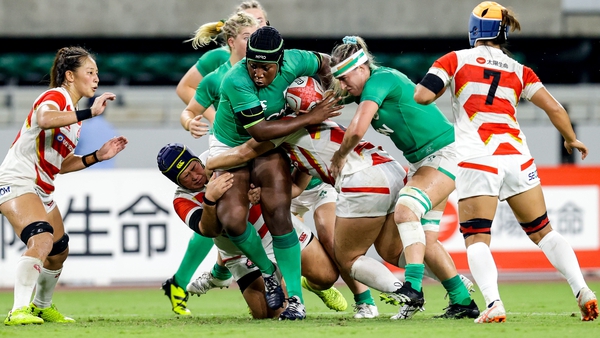