It's still early days for Greg McWilliams, but whether it's by circumstance or design, it's clear his selection policy is open minded.

Retirements, injuries and the perennial Sevens dilemma saw him bring 10 uncapped players to Japan this summer, having named nine uncapped players in his initial Six Nations squad earlier this year.

And with six of tomorrow's matchday 23 to face Japan set for their Test debuts, it will mark 13 new caps handed out by the head coach in his first six games in charge.

The fact that Ireland missed out on qualification for the upcoming World Cup has allowed the former USA assistant the luxury - if you could call it that - of experimentation with his squad, as they aim to get a head start on the cycle for the next World Cup in England in 2025.

Dannah O'Brien will be the third player to occupy the 10 shirt this season after Nicole Cronin and Nikki Caughey, while her partnership with Ailsa Hughes will be the fourth different 9-10 combination, a pairing Ireland have struggled to nail down consistently for several years.

The head coach maintains the lack of consistency in selection isn't something he's too worried about. If anything, he's warned us to expect more changes down the line.

"This is the perfect opportunity to be giving people an opportunity. Games like this very seldom happen so you have to experiment," McWilliams said.

"People will say, "Oh they're testing another half-back combination.’ But there will be lots of them. We’re not in a rush here. This is a great chance for us to test players. I’m very comfortable with another combination the next week. People are working very hard and deserve a shot. Away we go and eventually the more people you have getting an opportunity, it’s a good thing."

"Selection comes down to the person, the player and the performance strategy. So depending on how the game is going, both nines have strengths."

McWilliams has also stressed the importance of versatility in his squad, with Nicole Cronin - who started four of Ireland's Six Nations games at out-half - likely to come off the bench at scrum-half tomorrow, while replacement wing Molly Scuffil-McCabe has also trained at nine.

"You need to be adaptive. In the women’s game you need to be able to play multiple positions. If we’re doing a good job coaching, players should be able to interchange. It shouldn’t be as rigid as, 'Oh they’re trying another nine and ten'," he added. 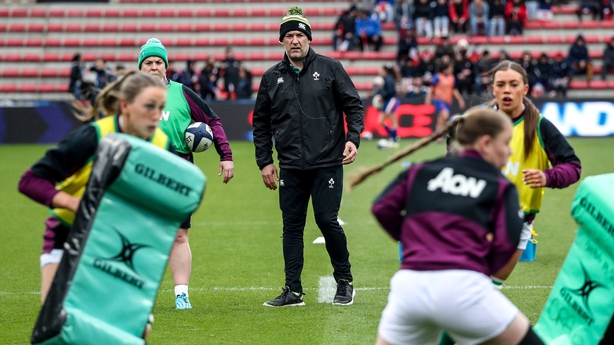 "It’s not a bad thing, it’s positive that someone gives them opportunities. Whenever I leave this job, I hope people know I was prepared to give people a chance because everyone deserves a chance.

"We cover all those in training and their versatility is a strength. Nicole [Cronin] is a baller. I like her at 10 and nine. It depends on how the game goes.

"There's no pressure on Dannah [O'Brien], Nicole can come on if needs be but if Dannah is going well, we can bring on Nicole or Molly at nine. They both play slightly different ways. And again that is the performance strategy.

"Selection comes down to the person, the player and the performance strategy. So depending on how the game is going, both nines have strengths."

While the Irish starting backline has a combined total of just 38 Test caps, McWilliams is hoping a more settled pack can provide them with quality ball.

Seven of the forwards that started the final Six Nations meeting with Scotland retain their places, while the only change sees Katie O'Dwyer and Christy Haney swap shirts at tighthead prop.

"You want to do your country proud, do your friends, family and yourself proud, and there's no better feeling when you come off the pitch and you've done that. And then you're ready to go and do it again next week."

For hooker Neve Jones, Japan brings back fond memories, having made her first start in last November's win against the 'Sakura Fifteen', a place she hasn't given up since.

"I can remember the feeling, pulling on the number 2 jersey for the first time," the 23-year-old said.

"You can't really put words on how it feels to do so, and to be able to do it again during the Six Nations... You're just filled with pride and passion, and you want to put the jersey in a better place each time. Hopefully I've done that and will continue to do that this weekend.

"As I said before, and will say again, I'm raring to go and tear it up on the field with the girls.

"When you pull on the green jersey, there's no better feeling. It's like every Christmas day you had as a kid pulled into one. When you come off the pitch, you want to put it back on [the jersey], and play more rugby, even though you've played 80 minutes.

"You want to do your country proud, do your friends, family and yourself proud, and there's no better feeling when you come off the pitch and you've done that. And then you're ready to go and do it again next week."

And the Gloucester-Hartpury hooker says they want their series in the far east to kickstart something special.

"It's a very exciting time, it's the first time we've had a summer tour together. It's been great to come together and tour and get to know each other, and it's just really exciting for everyone.

"You can see the footage we've caught on our days off, we just really get on.... Just being with each other, and having the craic, and getting to know each other, that kind of thing. It's a really exciting time and we just can't wait to play some rugby now."