Wallabies captain Michael Hooper is in good hands as he deals with wellbeing issues in Australia but there is no timeline on his return to the group, scrum-half Nic White said.

Hooper was selected for the Rugby Championship opener against Argentina in Mendoza last Saturday but flew home after informing coach Dave Rennie he was not in the right frame of mind to play.

Veteran prop James Slipper stood in as captain and led Australia to a 41-26 win.

White said Hooper had been in touch with team-mates to offer congratulations from Australia but there was no indication when he might rejoin them.

"I spoke to him after the game once he touched down," said White. "Obviously, he was stoked with the result.

"And yeah, we'll stay in contact with him. Obviously, he's got a lot of support around him.

"He's not on his own now. So the staff put a good plan in place for him.

"I don't think there is [a timeline on his return]."

The injury-hit Wallabies meet the Pumas again in San Juan on Saturday before heading home to play world champions South Africa in Adelaide on 27 August.

The players thrilled Rennie and his staff with their brave performance in Mendoza as they shrugged off Hooper's late withdrawal and injuries to key players to overhaul the Pumas.

Starting hooker Dave Porecki was ruled out due to concussion in the lead-up to the Test, while flyhalf Quade Cooper joined Samu Kerevi on the long-term injury list after suffering a serious Achilles injury midway through the match.

White said the Wallabies would need to be ready for a backlash from the Michael Cheika-coached Pumas, who gave up 19-10 lead at half-time in Mendoza and would be disappointed with their performance.

"Cheika will have them fired up," said White of the former Wallabies boss.

"The emotion will be there but we need to get back to the process of how we want to play, what our identity is.

"Plenty there for us to fix." 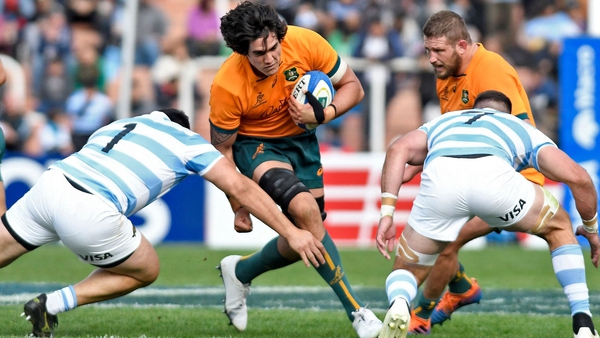