All Blacks prop Angus Ta'avao will miss the final Test against Ireland after receiving a three-week ban for his red card challenge on Saturday.

The Chiefs prop was introduced as a temporary replacement after Oa Tu'ungafasi had been yellow-carded and New Zealand needed an extra front row to compete at a scrum.

However, just a few minutes later, Ta'avao collided dangerously with Garry Ringrose, who was replaced and misses the final game of the tour with concussion.

After a consultation with the TMO, referee Jaco Peyper sent Ta'avao off.

At today's hearing, the Kiwi claimed that the red card for "for an act of foul play contrary to Law 9.13, a player must not tackle an opponent early, late or dangerously" was not merited due to mitigating factors.

However, World Rugby upheld the referee's decision and decided that the incident was a mid-range offence which opens with a six-week suspension.

That was reduced to three due to the player's previous good record but rules Ta'avao out of Saturday morning's series decider in Wellington. 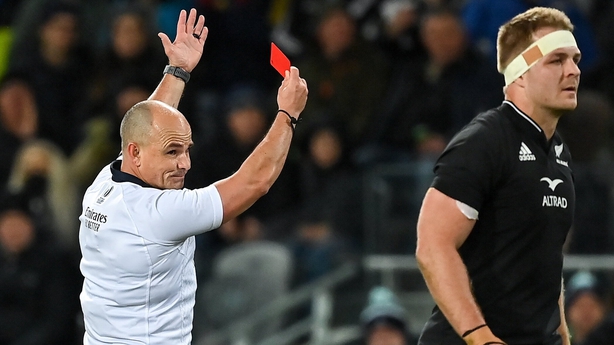 World Rugby said: "The independent Judicial Committee, chaired by Wang Shao-Ing (Singapore), joined by former player Leon Lloyd (England) and former coach Frank Hadden (Scotland), heard the case and considered all the available evidence, including hearing from the player and his legal representative.

"The player admitted that he committed an act of foul play but maintained that a red card was not warranted due to the presence of mitigating factors.

"Having reviewed all the evidence, the committee applied the Head Contact Process and upheld the red card under Law 9.13.

"Taking into account the player's excellent disciplinary record and the mitigating factors under Regulation 17, the Committee granted the player full mitigation of 50 per cent to three weeks, resulting in a sanction of three weeks.

"The committee also approved the player's application under the Head Contact Process – Coaching Intervention Programme. If the coaching application is approved, the player’s sanction could be reduced by one week.

"The player has the right of appeal within 48 hours of the issuing of the full written decision."

Follow Ireland's third Test against New Zealand via our live blog on rte.ie/sport and on the RTÉ News App or listen to live radio commentary on RTÉ 2fm (8.05am)