South Africa named a new captain, plus two uncapped players in their starting line-up and a further four among the replacements as coach Jacques Nienaber announced wholesale changes for the second test against Wales in Bloemfontein on Saturday.

Handre Pollard, who returns to the squad after not featuring in the narrow 32-29 first Test win in Pretoria at the weekend, will take over the captaincy from Siya Kolisi as Nienaber keeps just one player from Saturday's starting XV.

Winger Kurt-Lee Arendse and backrow forward Evan Roos, named the best player of the recent United Rugby Championship where he helped the Stormers to victory, will start, while Ntuthuko Mchunu (prop), Ruan Nortje (lock), Deon Fourie (backrow) and Grant Williams (scrum-half) could make their debuts off the bench.

Nienaber kept only four players from the matchday 23 for the first test as he looks to give more international experience to squad members.

Eben Etzebeth, who will earn his 99th cap for South Africa on Saturday, is the only player to start again while hooker Malcolm Marx, prop Vincent Koch and utility back Damian Willemse are on the bench.

"We said from the outset that we needed to strike a balance between giving our talented young players an opportunity to show what they can do at international level, and winning," said Nienaber.

"If one looks at the balance between players who have played at this level and those who have performed consistently well for their franchises and clubs, I think we have a nice balance in this squad.

"A number of these players have been with us for a few seasons, while others travelled with us last season to Australia for the Rugby Championship and the year-end tour, and then there are a few new faces who showed during the season that they have the potential to rise to this level of the game, so we are excited to see what they can do on Saturday," the coach added.

The Boks have again opted for a split of six forwards and two backs on the bench, with Willemse's versatility seeing him able to cover fly-half, centre and full-back. He put over a last-gasp winning penalty for South Africa to edge Wales in Pretoria.

"Wales showed last week that they are fighters and can go for the full 80 minutes and we are expecting nothing different from them this week," said Nienaber. 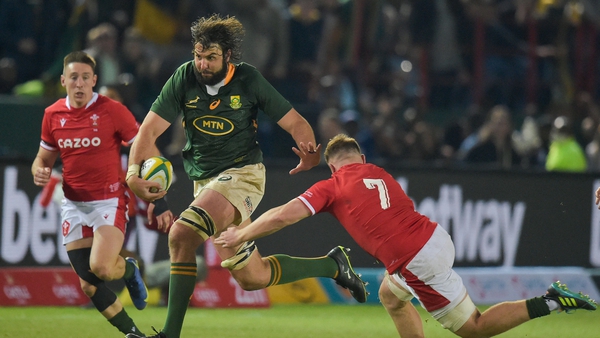