Former Ireland international Mike Ross says it is "a bit strange" that Cian Healy and Finlay Bealham are training to cover both prop positions in the front row, despite the two players specialising in contrasting roles.

On Thursday, Andy Farrell named his Irish side to face the All Blacks in Saturday's first Test of the New Zealand tour in Auckland.

Healy, who was a major doubt after being carted off with an ankle injury in Wednesday's defeat to the Maori All Blacks, has been included in the matchday squad and will be on the bench alongside Connacht's Bealham.

But Farrell suggested that Healy and Bealham, who have been specialist loosehead and tighthead props respectively throughout their careers, are training to cover both positions.

"It is a bit strange. I know Cian very well and he'll back himself at anything but Cian has a 100-odd caps at loosehead and Finlay has played the vast majority of his career at tighthead," Ross, a specialist tighthead during his own career, told RTÉ's Game On.

"So I'm not really understanding why you'd want to swap them around, except maybe most of our looseheads are probably the wrong side of 30, so maybe they're looking at moving Finlay across, because he's been playing well and he's been finishing off games well.

On the overall Ireland XV selected, Ross said Farrell was going back to utilising players accustomed to playing with each other in contrast to Wednesday's selection for the Maori defeat.

"I think he's gone for a cohesive team. All these guys have played regularly together before," he said.

"If you look at the performance on Wednesday when Ireland played the Maori, a lot of those guys are playing in the green jersey for the first time together and it showed.

"There was a bit of a lack of cohesiveness, some of the kick-chase we put in particularly in the second 20 minutes was when the Maori did most of their damage and that really spoke to the guys who weren't used to playing with each other."

Looking at the back row, Ross predicted that the selection was predicated on slowing down New Zealand, frustrating the ruck and then bringing on Jack Conan to make an impact against tiring legs.

Follow Ireland's Test series against New Zealand via our live blogs on rte.ie/sport and on the RTÉ News App or listen to live radio coverage on RTÉ Radio 1. 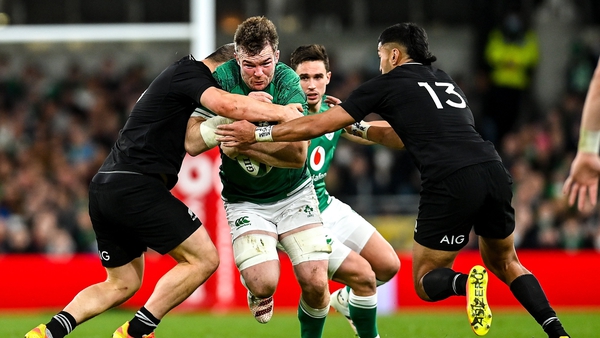 O'Mahony starts as Healy passed fit for All Blacks