TJ Perenara isn't expecting Ireland to come at the Maori All Blacks with anything different than what earned Andy Farrell’s men victory over New Zealand last November.

An Ireland XV kick off the tour with a non-cap match against the Maori on Wednesday in Hamilton (8.05am).

Farrell is expected to hold back most of the frontliners who will make up the team for the opening Test on 2 July against the All Blacks in Auckland.

Scrum-half Perenara, who started the 29-20 loss in Dublin last autumn, was something of a shock omission from Ian Foster’s squad but is likely to face the Irish as part of the Maori selection.

"I do [expect the same]," said the 30-year-old Hurricanes man when asked about the challenge.

"The way they play footy since we lost to them has been very similar, and they do it really well.

"They hold the ball for long periods of time, they don’t allow opposition teams to get into their attacking flow so I don’t expect them to change that for us."

Having been a central part of the New Zealand squad since his debut in 2014, Perenara says the call-up for the Maori is just part of his rugby journey.

"We always wanted to be Maori All Blacks," Perenara said at a media conference.

"Obviously, we wanted to be All Blacks as well, but my fondest memory isn't of the team so much, but it's about running around with my mate, talking about his koroua [elder family] and how we wanted to be a part of it.

"It’s a proud moment for me. Not just in my career, but in my life

"To represent my whānau [community] on this stage is something that I’ve always wanted to do. It’s been a goal of mine and to be in this environment is a huge honour.

"[Losing an All Blacks squad place is] definitely not the hardest thing I’ve been through.

"There are lots of things in life that are thrown at you, and it’s about how you respond.

"For me, the last couple of weeks have just been another step in my journey.

"I believe that for everything that happens and this is another step.

"My perspective on footy and life at the moment is that I don’t really have an end goal.

"Making a team or winning whatever championship, that’s just part of my journey.

"Having an end goal and dangling a carrot sells what I’m doing every day a bit short.

"Yes, I want to make teams, I want accolades and want to win because that’s all part of it.

"But that’s not the end goal for me." 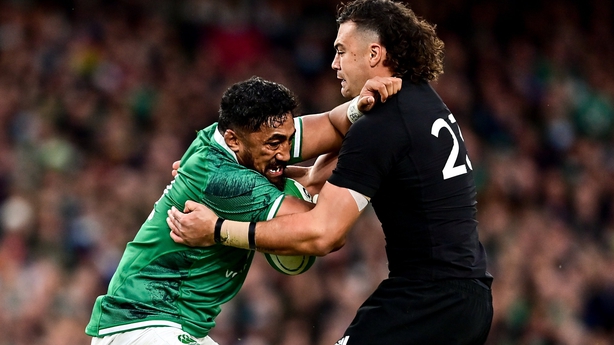 Meanwhile, utility back David Havili (above), who came on as a replacement in the Autumn Series international against Ireland says he was able to learn lessons from that match.

"International rugby is so physical, and you've got to be able to get your body back to where it needs to be each week, and that was a big learning for me," said the Crusaders player, fresh off the back of another Super Rugby title.

"I was sort of a wee bit tired going into the back of those [autumn] games, and I've focused hard around my recovery this year, and getting my body right and where it needs to be, to keep competing at that top level."