Former rugby league standout Roger Tuivasa-Sheck and his Super Rugby team-mate Stephen Perofeta have been included in the All Blacks squad for the July series against Ireland, but there's no room for experienced half-back TJ Perenara.

Tuivasa-Sheck and Perofeta are among six uncapped players in the squad along with prop Aidan Ross, loose forward Pita Gus Sowakula, scrum-half Folau Fakatava and outside back Leicester Fainga'anuku.

Livewire Fakatava's inclusion along with Aaron Smith and Finlay Christie meant there is no place for Brad Weber or Perenara, who has been almost ever-present in the New Zealand set-up since 2014.

"So narrowing that down, we just feel that with Folau and Finlay, they offer something a bit different and a chance to see how we can incorporate that into an All Blacks game."

Tuivasa-Sheck made the switch to the 15-man code with the intent of making the All Blacks squad for next year's World Cup in France and his inclusion is another step towards that goal for the fleet-footed centre.

"We've been delighted with his progress, particularly in the last four or five weeks," Foster added.

"It's a chance to get him in and have a look at him. While he's earned his spot in there, there's a lot to learn." 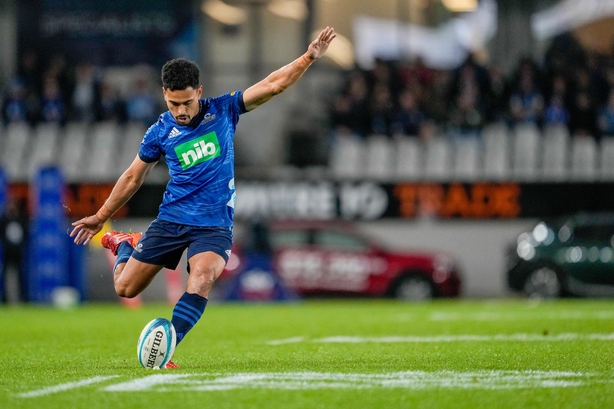 With Damian McKenzie ineligible after his sabbatical in Japan, Perofeta (above) - also a goal-kicking full-back who can slot in at out-half - gets his reward for his fine form with the Auckland Blues.

Openside flanker Sam Cane was retained as captain in a loose forward selection that included the popular Sowakula, who was perhaps the beneficiary of the shoulder injury to the similarly versatile Ethan Blackadder.

Ireland beat the All Blacks 29-20 in Dublin last November, one of two defeats on New Zealand's end-of-year tour that rang alarms bells back home.

The series opens at Auckland's Eden Park on 2 July with tests in Dunedin and Wellington following over the next two Saturdays.

Ireland will also play the Maori All Blacks in a tour match in Hamilton on 29 June.