Lyon claimed the first European trophy in their history with a 30-12 victory over Toulon in the final of the Challenge Cup at Stade Velodrome.

In front of a record crowd of 51,431 in Marseille, Lyon almost made a stunning start with a try inside the first minute, only for Baptiste Couilloud's effort to be ruled out by the TMO as the ball went forward off Jordan Taufua in the build-up.

The same players were involved in opening the scoring in the eighth minute as Taufua intercepted a pass on the Toulon 22 and, although he was hauled down short of the line, he popped the ball up for Couilloud to score. 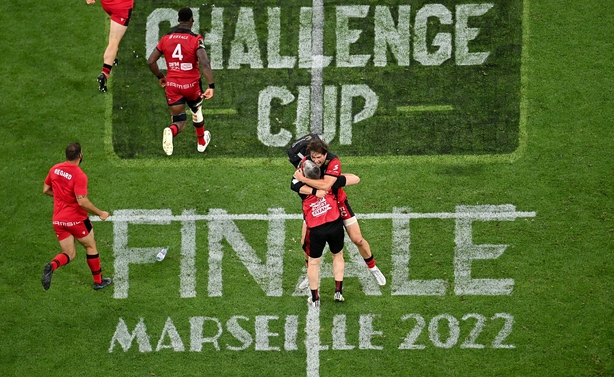 Toulon got back on level terms through Baptiste Serin's close-range try, but Leo Berdeu's penalty put Lyon ahead again and Couilloud then sent Davit Niniashvili clean through on the stroke of half-time, only for the winger to carelessly graze the dead-ball line with his left foot before touching down.

Lyon were awarded a penalty try early in the second half when Aymeric Luc was sent to the sin bin for slapping the ball away to prevent Niniashvili going over unchallenged.

And Pierre-Louis Barassi finished off a slick team move just two minutes later to effectively seal the win, with Cheslin Kolbe's late score of little consolation to a well-beaten Toulon.