The team is unchanged from the side that beat Toulouse in the semi-final.

Ireland prop Furlong injured his ankle and winger Lowe hurt his shin in the 40-17 victory over the 2021 winners but both have recovered as Leo Cullen's men go in search of a record-equalling fifth title.

Will Skelton returns for Ronan O'Gara's La Rochelle, while both back row Victor Vito and scrum-half Tawera Kerr-Barlow miss out for last year's beaten finalists.

Lowe starts in his usual left-wing berth, with Jimmy O'Brien on the opposite side and Hugo Keenan at full-back.

Robbie Henshaw and Garry Ringrose continue in the centre, while Jamison Gibson-Park and Johnny Sexton are named at half-back.

Andrew Porter, Rónan Kelleher and Tadhg Furlong will pack down in front of locks Ross Molony and James Ryan.

In the back row are Caelan Doris, Josh van der Flier and Jack Conan. 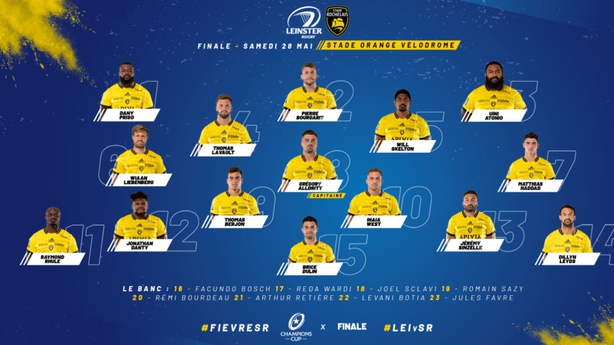 O'Gara had hinted during the week that Kerr-Barlow (hand) and Vito (ankle) might be involved but both have failed to make the panel.

Matthias Haddad comes in for Vito, while Thomas Berjon replaces Kerr-Barlow and there is also a return for Brice Dulin, who missed the Racing 92 match and last week's Top 14 win over Stade, at full-back.

Lock Skelton had been a concern but the Australian showed no ill effects from a 15-minute run out in last week's match.