Staring at a first wooden spoon in the TikTok Women's Six Nations since 2004, Enya Breen scored a dramatic converted try in the last play of the game to gain a tiny bit of revenge for the Parma pain.

In the first meeting of the teams since Scotland ended Ireland’s World Cup hopes in Italy last year, the poetic nature of the ending escaped no one.

Sarah Law’s conversion with the last kick of the qualifier knocked Ireland out of contention and a heroic late try resulted in Breen being given the same shot to earn Ireland the narrowest of wins.

Cool as you like, the Munster centre struck the ball straight and true to hand Ireland their second win of the campaign and spark wild scenes of celebration on the pitch and in the stands.

The victory saw Ireland move to nine points and secure a fourth-place finish ahead of Italy and Scotland.

The drama of the end game will be also serve as a boost that the women’s game sorely needed, drawing the curtain down on Greg McWilliams first campaign in charge after a tumultuous year for the team, on a positive note.

Where skill was lacking, heart and hunger were present in spades and the team can look forward to an inaugural summer tour, most likely to Japan, with that feelgood factor.

It didn't take Scotland long to convert an early spell of pressure into points. Debutant Vicky Irwin held on to the ball on the ground and when the resulting penalty was kicked to the corner, the visitors took full advantage.

Sarah Bonar claimed the throw and from there the pack edged to the line with number 8 Evie Gallagher getting the touchdown in the fourth minute.

It went unconverted but Scotland looked sharper in the opening quarter; Ireland's brief foray into the Scots’ half after Breen broke the line was ended by a sloppy offload.

But the Irish set piece was functioning better than has been the case and they won three of their four lineouts in the half.

Ireland are starting to settle at Kingspan Stadium, but find themselves behind after this early Scottish try.

When they forced a penalty at a Scottish put-in, number 8 Hannah O’Connor felt she had the distance from all of 40 metres and duly struck Ireland’s first points in the 16th minute. It even had a few yards to spare.

The returning Sam Monaghan, Linda Djougang and Dorothy Wall were running hard yards off the rucks but the game was littered with numerous handling errors, the flow not helped by a steady drizzle in Ravenhill, albeit some poor decision-making by both sides didn’t aid matters.

O’Connor missed another penalty near the half hour mark and Scotland enjoyed yet more possession in the Irish half,

But Ireland won a penalty off a Scottish put-in before Djougang rattled Rachel McLachlan with a shuddering tackle to a huge cheer from the Belfast crowd, that would have been more sizeable had the game not clashed with Ulster’s URC tie in Edinburgh.

Right on half time Ireland hit the front, with Neve Jones touching down for the try.

However, Ireland had the last say and when wing Shona Campbell was penalised for obstructing Aoife Doyle, Ireland kicked to the corner and captain Nichola Fryday claimed the ball with former Ulster hooker Neve Jones, official player of the match, getting on the end of the maul to give the hosts an 8-5 lead at half-time.

Bryan Easson's side again started the half the better team and when Ireland were slow to roll away close to their own posts, centre Helen Nelson levelled the game with the subsequent penalty.

Ireland’s discipline let them down again at the breakdown, out-half Nikki Caughey and centre Sene Naoupu penalised to allow the Loughborough Lightning back to quickly add two more penalties to push Scotland’s advantage to six points with 17 minutes to play.

There was still time to mount a rescue effort and they managed to work the ball into the Scots’ 22 but a series of carries close to the line ended with a turnover, Bonar coming up with a big play.

Then Jones blocked down Nelson but lost a race to the line with Emma Orr.

O’Connor, player of the match from this view, won a turnover to give Ireland one more chance but the Scottish defence pushed Molly Scuffil-McCabe into touch.

With the clock deep in the red, Ireland came good and went through multiple phases before Breen barged her way over, close enough to the posts to give her a decent shot. And she took it. 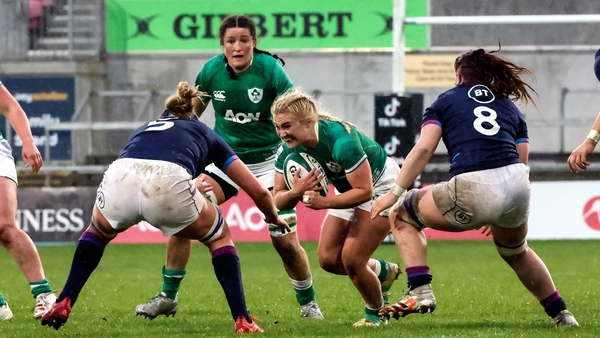