In the last decade, a 'Big Three' have dominated the Irish club rugby scene.

Between them Lansdowne, Cork Constitution and Clontarf have lifted the last seven titles dating back to 2013, while since the reintroduction of the play-offs in 2015, each final has been contested by two of the trio.

Enter Terenure College; the Lakelands club are the first side since St Mary's in 2012 to muscle in on the business end of the season, their dramatic semi-final win against Lansdowne last Saturday securing their place in a first ever Division 1A final.

With Covid-19 having cut short the 2019/20 season, and the second wave of the pandemic seeing the following campaign culled, tomorrow's final between Clontarf and Terenure (Aviva Stadium, 3pm) is a first men's AIL showpiece since 2019.

In that final three years ago, tomorrow's favourites Clontarf were beaten by Cork Con, with the Munster side having been runaway leaders when the league was shelved in March 2020.

One would assume that righting the wrongs of their previous final defeat would be a motivator for Clontarf tomorrow. Their captain Matt D'Arcy disagrees. Given the chaotic nature of the two abandoned campaigns, the 2019 final feels like a lifetime ago.

"It's a funny one, honestly, hand on heart, I haven’t thought of that final at all, with everything that’s gone on," the Clontarf skipper laughs.

"It was so long ago now, the squad has massively changed, a lot of new young players have come through, and a few of the older fellas called it quits with the gap of Covid.

"It feels like that was ancient history, which is interesting.

"I know someone was mentioning that Cork Con were the holders, some people around the club didn’t even realise because it was so long ago. I barely remembered that we were the ones who lost, which is a funny way to look at it."

While there may not be any hang-ups over the 2019 decider, they do have experience to fall back on at this time of the season, in particular D'Arcy.

Tomorrow's decider will be his fifth, with the 31-year-old centre having won the league with the north Dublin club in 2016, while suffering final defeat in 2015, 2017 and most recently 2019.

The former Munster back could have had a second medal though, having gone travelling to Australia in 2014, the year in which they won their maiden All-Ireland title.

"I actually can't remember the last few minutes, I could barely watch. It was unbelievable once the whistle went."

With two wins and three more finals in the last decade under head coach Andy Wood, 'Tarf have either been there or thereabouts when a trophy has been handed out.

It's a different story south of the Liffey in Terenure, who played out a nailbiting 20-18 semi-final win against Lansdowne at Lakelands last week to reach their first top-tier final, having lost out in the play-offs a couple of times before.

"It was stomach in the mouth kind of stuff," Terenure skipper Stephen O'Neill tells RTÉ Sport, about their two-point victory.

The captain has had to sit and watch the final games of the season due to a complex shoulder injury suffered in their regular season defeat against Clontarf in March.

"I was actually going for a turnover, one of the two I go for in a year," he laughs.

"I was over a ball, someone was clearing me out, and whatever the impact it popped the collarbone out of place, just pot luck. I learned my lesson not to go for a turnover when you're 75kg!"

Having initially targeted the semi-finals for his return, further scans confirmed his season was over, with the 27-year-old having surgery last week, the day before their semi-final against Lansdowne.

"I got my operation on Friday around midday, and was due to be in for two days, but I said to the surgeon Ruth Delaney, 'my team have a pretty big semi-final, could I get discharged?'

"She came up to me around midday Saturday and asked how I was feeling. I got out of there and got to the club as the lads were running onto the pitch.

"It was good, good to be there, although nerve wracking as hell.

"I don't know how coaches do it every week, it was just so hard not being able to help, just completely out of your control.

"I actually can’t remember the last few minutes, I could barely watch. It was unbelievable once the whistle went."

The regular season would support Clontarf as favourites to win a third title this weekend, with Andy Wood's side having cantered to a first-place finish, winning 17 of their 18 games, the only blemish being a mid-season defeat to Lansdowne.

The Castle Avenue side's form has been ominous at times, showing few signs of nerves in their 29-13 win against Cork Con in the last four, outscoring the defending champions by five tries to one.

"The Lansdowne loss came at a good time for us," D'Arcy says of his side's sole defeat this season.

"We had won five on the bounce and then lost to them, so it was a good reset to have, a good grounder. We never got too far ahead of ourselves.

"It worked for us, because everyone was trying so hard to get picked, there was never any issue of getting ahead of ourselves. That's the beauty of having competition in the squad."

Strong internal competition appears to be a theme for both of this year's finalists, whose 'seconds' teams also contested last week's Metropolitan Cup final, which 'Nure won 27-24 (below). 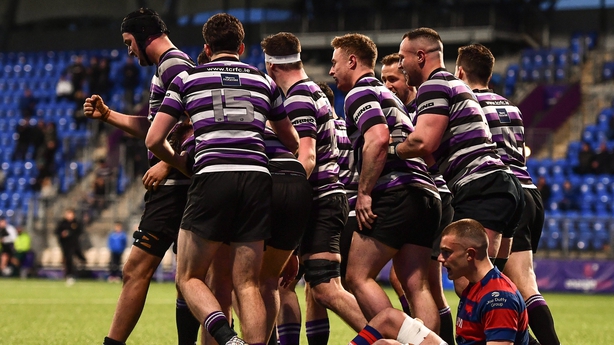 When their first teams met in the AIL this season though, Clontarf won both, the first a comprehensive 29-14 victory, before they edged a 12-11 scoreline in March.

"That was a big game," added D'Arcy of the most recent meeting.

While Clontarf's form has looked rock-solid since day one this season, Terenure started slow. A win against UCC on the opening day was followed by three consecutive defeats, and it looked like it would be four losses in a row when they trailed Dublin University 15-13 late on in their next game in November.

"We always had a strong squad but needed one or two of those superstars, they're game changers at the end of the day. They’ve been absolutely phenomenal."

But then, a sliding doors moment, when they were awarded a penalty in the final minute, and Caolan Dooley's shot at goal from just under 50 metres snuck over the posts. It was a kick that ended their losing streak, and would spark a run of 13 wins in the final 14 games, to secure a second place finish.

"If things go our way this weekend, he's to thank for it to be honest," O'Neill says of Dooley.

"That kick from Caolan was just season-changing. It was such a big moment. You get a lift, because you get down on yourself when you're losing."

In O'Neill's absence, flanker Harrison Brewer - son of former All-Black Mike Brewer - will lead the team. O'Neill and Brewer are among a large chunk of the Terenure squad raised in the club from their days as minis, as well as the school next door.

But with 'Nure not being able to draw on any clubmen in the Leinster squad or academy, Sean Skehan's recruitment has sprinkled that little bit extra onto the squad to turn them into challengers, with the likes of out-half Cathal Marsh (ex Leinster) and number 8 Jordan Coghlan (ex Munster, Leicester) having signed in the last couple of seasons after stepping away from the pro game.

"Some of the recruits he's brought in; in my opinion the two best players in the league, Jordan Coghlan and Peter Sylvester, they’ve been what we needed.

"We always had a strong squad but needed one or two of those superstars, they’re game changers at the end of the day. They’ve been absolutely phenomenal.

"The outside lads have really bought into that. Peter Sylvester's Dad went to school in Terenure, so some of those lads who came in have local connections. It’s strange, but it stands to us how much people care," O'Neill says.

"It's special, it's a really special club. And I’m not the only one like that. A lot of the Terenure lads have Terenure roots, which is really nice. When push comes to shove and when things get tough, those lads will stand up because these things mean a lot to them."

On the other side, the league leaders have been able to avail of a number of Leinster players during the campaign. When Clontarf won comfortably at Lakelands earlier this season, their pack contained the likes of Vakh Abdaladze, Brian Deeny and Martin Moloney, while Alex Soroka and David Hawkshaw have also featured at times, as well as Ulster lock Mick Kearney.

"In previous years you might have been relying on them more, but the strength in depth has been so good. Alex (Soroka, below) is the only one we've had on a regular basis," D'Arcy says of the Interprovincial players. 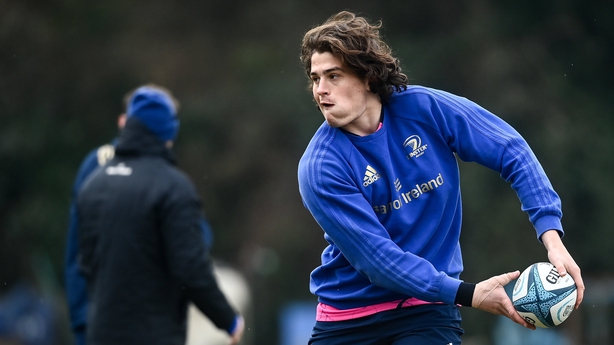 The bulk of their squad is settled though, and plenty of it local. D'Arcy is one of those, and is "probably the best player in the league for the last five or six years", according to the Terenure captain O'Neill.

Matt's twin brother Adrian is also a key member of the squad, along with other long-term clubman Cathal O'Flynn, Ivan Soroka and Fionn Gilbert.

It's appropriate that the two captains - as well as Terenure's vice-captain Brewer - are all products of their clubs' mini-rugby programs.

The two D'Arcy brothers have won All-Ireland League titles together for 'Tarf, while O'Neill is the latest in a long line of his family to have worn purple, black and white.

"My Dad played down the club, along with three of my Mom's brothers.

"Three of my older brothers played for the firsts, and I’ve cousins who played junior rugby down in the club. It’s a two-sided Terenure family!"

Such is the size of the occasion for the club, two of his brothers will even fly home from Sydney to make sure they don't miss it.

"That would mean so much, making those people proud."

"It's steeped in the family, I’ve known nothing else. Since I remember, I’ve been down in Lakelands getting the crap kicked out of me by my brothers.

"It's special, it’s a really special club. And I’m not the only one like that. A lot of the Terenure lads have Terenure roots, which is really nice. When push comes to shove and when things get tough, those lads will stand up because these things mean a lot to them."

Winning a first title, O'Neill says, would mean "everything".

"I've thought about it for my whole life, and the older I got, the more I wanted it. I was always waiting around for a Terenure team to win a top division title, and we never have. It’s been my biggest driver since I joined my club.

"Not just for me, but also what it would mean to others, the players and captains who have gone before, the people who line the pitch, the bar staff, the groundsman, it’s such a close-knit group.

"That would mean so much, making those people proud."

Likewise, having already won a title with his brother, captaining a champion Clontarf team would be the ultimate.

"It would be unbelievable. Something I would have dreamt of," D'Arcy concludes.

"It would be an absolute honour, and I know Ben Reilly who captained the previous teams, it’s a massive achievement.

"It would be so great for friends, family, and the support we have. It would be fairly emotional, and something to remember forever."