Ulster head coach Dan McFarland was understandably delighted with his team's performance in their 26-20 victory over Toulouse but warned his players they would have to improve for the return fixture in Belfast next week.

The Irish province ran in four tries to two in their Heineken Champions Cup round-of-16 first-leg tie in front of a packed house at Stadium de Toulouse, with winger Robert Baloucoune running in a hat-trick.

"I think we could have taken a larger points difference," McFarland said. "But I’m not sure anyone wouldn’t take a six-point lead from Toulouse.

"We were playing Toulouse in Toulouse. We created opportunities in that game to score tries. For chunks of that game, we were really good."

But McFarland warned that Ulster’s slender advantage could be wiped out "in 15 seconds" of the second leg at the Kingspan next week if the defending champions hit their stride.

"They are Toulouse," he said, after the French side repeatedly stretched the visitors’ defence, even after they were reduced to 14 after just 10 minutes of a frenetic, pulsating match.

"They are the champions of Europe, champions of the Top 14, and they have got some of the best players in the world.

Juan Cruz Mallia was sent-off for taking out Ben Moxham in the air as the match was clicking into gear. After treatment, the Ulster winger got back to his feet but was taken off the pitch for an HIA and did not return.

Toulouse captain Antoine Dupont said his charges should be proud of their efforts at the end of "one of our best games of the season", insisting "anything is possible" heading into next weekend’s second leg.

"We know that the points average is important and the last try was good for us," Dupont said.

"We knew that Ulster would be a big challenge and playing with 14 players did not make our task easier. In spite of that, we didn’t give up and we caused them problems on several occasions.

"We can be proud of what we did. This was one of our best games of the season – we tried things, we played together in the same tone and in the same direction.

"Anything is possible. We are capable of anything. It’s obvious that it’s going to be hard after losing the first game by six points. They lose very few games and we know the challenge that awaits us." 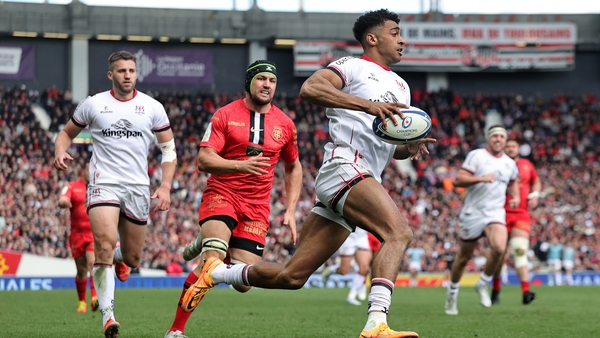