Munster will take on Exeter in the Heineken Champions Cup tomorrow without captain Peter O'Mahony and out-half Joey Carbery, who are both ruled out with injury.

Ireland flanker O’Mahony has a hamstring injury, while Carbery has a knee injury.

The province are hopeful that the duo will come into contention for the second leg next weekend.

"A hamstring complaint has ruled out O'Mahony with the Munster captain to be reassessed on Monday ahead of the return fixture at Thomond Park," said Munster.

"Carbery presented with a low-grade leg/knee injury following the Leinster clash but is expected to make his return to full training on Monday.

"Gavin Coombes has undergone surgery on the ankle injury he suffered against Leinster and has been ruled out until May."

Jack O’Donoghue captains the side in the Champions Cup for the first time with eight changes to the side that lost to Leinster last week for the Sandy Park encounter (5.30pm).

Alex Kendellen starts in Europe for the first time at number 8 on his 14th appearance of the campaign.

Haley, Earls and Zebo start in the back three with the centre partnership of Damian de Allende and Chris Farrell unchanged as Conor Murray and Ben Healy start in the half-backs.

Jeremy Loughman, Niall Scannell and Stephen Archer keep their places in the front row with Kleyn and Fineen Wycherley starting in the engine room.

Thomas Ahern is in line to make his Champions Cup debut off the bench. 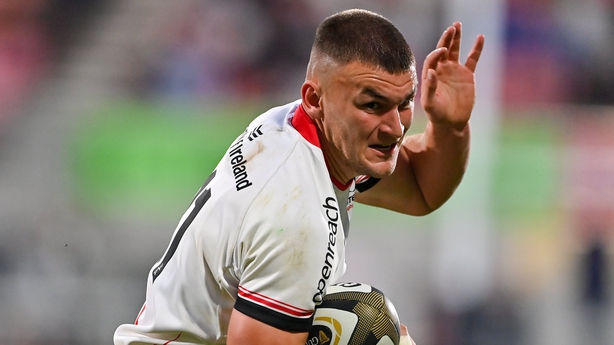 Bex Moxham will make his first European start for Ulster in the first leg of their round-of-16 clash against Toulouse at Le Stadium on Saturday afternoon (3.15pm Irish time).

Moxham is named on the left wing alongside Mike Lowry at full-back and Robert Baloucoune on the right wing. Stuart McCloskey comes in to start and will partner with James Hume in the centre. Billy Burns and John Cooney return to form the half-back pairing.

The front row sees Eric O'Sullivan and Rob Herring named at loosehead and hooker, with Marty Moore retaining his place at tighthead prop.

Alan O’Connor returns to pair up with captain Iain Henderson in the second row. Marcus Rea comes in at blindside flanker, with Nick Timoney and Duane Vermeulen retained at openside and Number Eight respectively.