Ireland internationals Tadhg Beirne, Dave Kilcoyne and Gavin Coombes have all been ruled out of Munster's Heineken Champions Cup clash away to Exeter Chiefs on Saturday.

In a serious blow to Johann van Graan’s plans for the two-legged tie, the trio have been ruled out for the away fixture at least, with fellow international Andrew Conway continuing to rehab his knee injury. 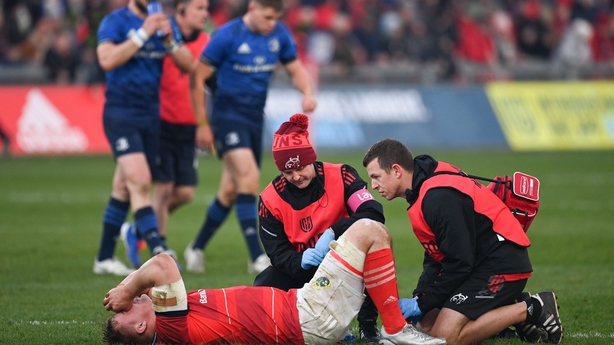 Number 8 Coombes - pictured above - limped off in the weekend's defeat to Leinster in the URC and will undergo a scan on his ankle.

Versatile forward Beirne, a key part of the Munster pack this season, is awaiting a specialist review on his thigh injury, while prop Kilcoyne will begin a period of rehabilitation after seeing a specialist for a neck injury.