Leinster showed on Saturday night why they're the standard bearers of URC rugby, with an emphatic win away in Thomond Park.

You could argue that Leinster are superior to Munster in many areas at the moment, but they went to Limerick without two international hookers and two international loosehead props in the starting XV, two international second rows were unavailable, Johnny Sexton was rested, Tadhg Furlong was on the bench, and they still won the game comfortably.

What caught my eye throughout the match was the variation in Leinster’s attacking game and how they use differing passes to gain an advantage depending on what they’re trying to do.

With defences narrowing up and putting the attack under more pressure in close these days, many teams are attempting to exploit them out wide with long passes and passes over the top of the onrushing, closing winger.

However, Leinster’s use of short and accurate passes is what does a lot of the damage, in what you could term as 'power play’ moments within the game.

Every phase is like a mini battle at the gain line and Leinster’s players are quite comfortable looking at the tackle line and making decisions in small areas.

Jamison Gibson-Park starts this from the ruck and creates a tempo by challenging the inside defenders and then someone runs a clever line into the biggest gap they can find in the defensive line.

However, these are rarely one-out passes. 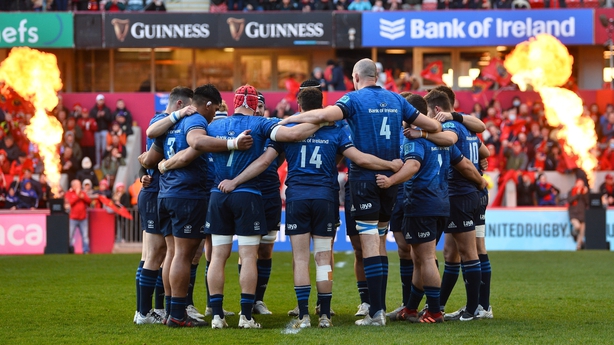 There was a moment where Gibson-Park hit Robbie Henshaw just around the ruck and he surveyed his options before passing back inside to his scrum-half who attacked the defensive line again.

In the same passage of play, Leinster walked Munster backwards about 30 metres without the hosts missing a tackle.

It brought Leinster from an attacking position to a very threatening position inside the opposition 22.

If Leo Cullen's side were to use this as their only tactic, it would be pretty easy to defend after a while.

The defence would narrow up to take the space away from Leinster and take away the decision they have at the tackle line to get into space.

Yet, they have the ability to read that defensive line and when it narrows up, the champions' half-backs revert to their default shape with forward runners off the out-half.

Except when they do, the passes don’t become longer.

The pass from 9 to 10 becomes longer, but everything else outside of that is still crisp and accurate, allowing the Leinster players more time on the ball, while moving the point of contact very quickly and forcing more decisions from the defence.

It must be exhausting to defend.

By having smaller passes, the ball is in the air for less time, which means the defence don’t have too long to adjust before the next jab comes from Leinster’s attack.

They don’t often wind up big haymakers with long passes, instead they go for regular jabs and keep knocking the defence back to give them more time while on the front foot.

James Lowe touches down in the left-hand corner and, after a brief visit to the TMO, try is given #RTERugby #URC #MUNvLEI

The opposition don’t need to miss too many tackles, evident from the hosts' defence on Saturday night, but they will lose the territory battle because Leinster win the gain line in the majority of their collisions.

It also takes a lot out of the legs of the opposition.

With short, sharp, and accurate passes, Leinster move the play and punch another hole.

This is another tackle for the defence. If you look at the stats, Leinster drew more than twice as many tackles out of Munster as what Johann van Graan's men did to their provincial counterparts.

The score was only 13-12 at half-time to Leinster and Munster were unlucky not to go into half-time with the lead, if it wasn't for a sloppy exit from a scrum in their own 22.

Yet, Munster had to work twice as hard in defence, with more physical tackles and more mental decision making.

While watching the match, another attacking masterclass came to mind.

The Lions were surprised by New Zealand's tactics in the first Test of the series in 2017.

Everyone expected the All Blacks' potent back line to pull off their usual lavish tricks, however, it was in around the ruck where New Zealand did their damage.

Sharp passes and clever lines running into gaps in the defensive line did the damage that day.

Leinster pull off something similar, except they do so within mini phases in the game to vary their attacking threat and to keep the defence guessing.

Garry Ringrose goes over for the opening try after good work by the Leinster forwards. #RTERugby #URC #MUNvLEI

It can be finished off with a ‘bridge’ pass at the end like Ross Byrne’s pass for the Garry Ringrose try over the Munster defence to bring the variety to their game.

The breakdown is a key variable within any attacking game.

Teams are focusing on getting ruck speed under three seconds while doing the opposite in defence.

To do this, you must go forward in attack and win the collisions, which Leinster didn’t always do at the weekend.

They managed to move Munster around enough to eventually get quicker ball and began to get away from them on the scoreboard in the second half.

However, it was a difference in kicking strategies that really separated the teams. 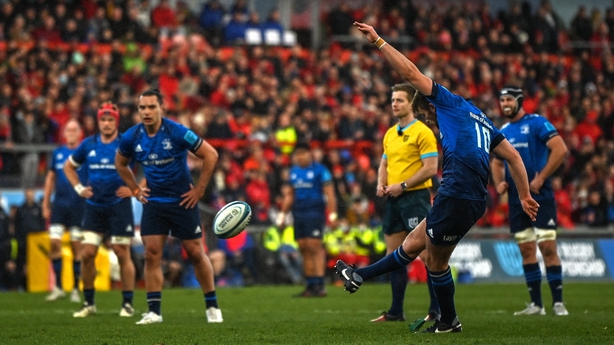 While Munster put the ball in the air to retrieve possession further up the pitch, the URC holders decided to find grass with longer kicks into space and forced Munster to kick the ball out, often deep within their own half.

This set Leinster up to go back to that attacking game but in a more threatening area of the pitch and managed to come away with more points in the second half.

Interestingly, Craig Casey took a leaf out of the Gibson-Park playbook and increased Munster’s tempo.

He didn’t spread the ball any wider, in fact he did well to challenge the defenders on either side of the ruck and played the likes of Shane Daly and Alex Kendellen into the game.

Munster scored a try through Damian De Allende and nearly got another through Kendellen.

This attacking strategy is nothing new to members of both teams.

We’ve seen Sexton and Gibson-Park pulling the strings with Ireland with shorter passes. Sexton has been getting the ball into his hands more often with the Irish system which is more challenging for any defence when the pass goes to the out-half and a channel wider.

The four-time European champions have been doing this for a while now, but it really showed the difference between both attacking strategies on Saturday evening.

This attacking game can’t be executed without pace, accuracy and attacking intent. Leinster have that in abundance with Caelan Doris, Josh van der Flier, Jimmy O’Brien, Hugo Keenan and Ringrose.

They retained their dominance over their closest rivals on Saturday night and were well deserving of their victory. 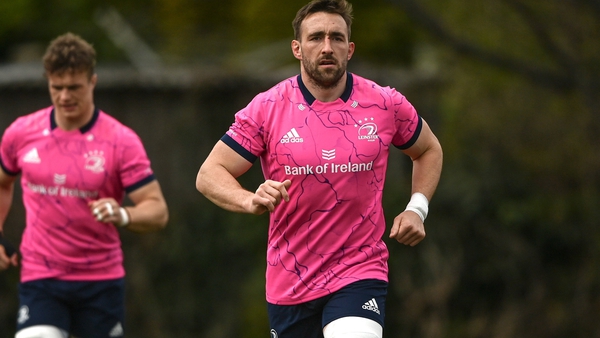