Ireland captain Nichola Fryday said she could ask nothing more from her team-mates in spite of their 27-19 TikTok Women's Six Nations opener defeat to Wales.

Ireland were beaten in their first game under new head coach Greg McWilliams, with Wales scoring two tries in the final ten minutes to come from behind and win.

Ioan Cunningham's side were deserving victors, despite only taking the lead for the first time on 74 minutes, with their set-piece dominant over the course of the game, allowing them control possession and territory.

While Ireland led for much of the game, they found themselves defending for the vast majority of the second half, with a powerful Welsh side eventually making their dominance count.

"Wales did exactly what we said they would do," said Ireland captain Fryday after the game.

"Their power game is something they are known for, and maybe that bit of experience they had, but we still had positive patches in that game and I'm extremely proud of the girls for sticking with it and not giving up.

"We have France next so we have no choice to but to put our heads down, make fixes and focus on next week.

"I'm hugely proud of the girls, the performance we put out, there were glimpses of really positive stuff for us. We'll take our learnings from the things that didn't go well, but the girls left everything on the pitch.

"I said at the start of the game we had to empty the tank and come in knowing we did everything we could. That's what the girls did.

"We'll take our learnings and move on."

While Ireland found themselves defending for large periods, their attack was quite clinical with the limited possession they had, with tries for Amee-Leigh Murphy Crowe, Linda Djougang and Stacey Flood putting the hosts nine points in front midway through the second half.

"I think in parts of that game you saw glimpses of the attacking game we're trying to play," said Fryday.

"We have serious backs, and in the pack we have extremely skillful players. The offload from Sam [Monaghan] to Linda for that try, that's just something you dream of as a forward.

"There are huge positives."

The second row was captaining Ireland for the first time, having been appointed skipper by McWilliams, replacing the retiring Ciara Griffin.

And the Offaly native says leading her team-mates out at the RDS was a dream come true.

"It was a huge moment, I was extremely proud," she said.

"Every person dreams of captaining their country, and very few actually get to fulfil that role, For me, it was a huge moment and I'm just proud of the girls for that shift.

"To have that crowd, the first one we've had since 2020 in the Six Nations - some girls haven't got to experience that with Covid.

"They got to experience that home support, and we're really appreciative of the crowd that came out." 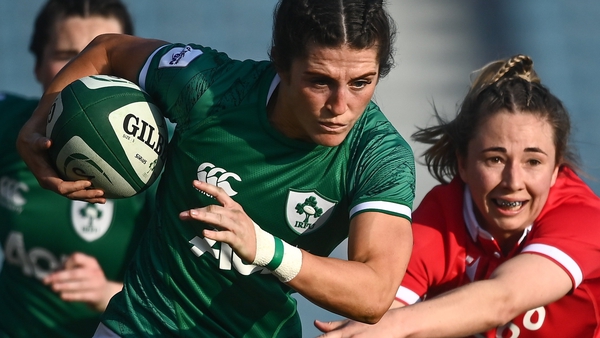