Italy's shock victory over Wales marked the beginning of a new chapter and proved that the Azzurri can hold their own at the top table of European rugby, according to captain Michele Lamaro.

Question marks had been raised about Italy’s future in the Guinness Six Nations following a run of 36 successive defeats stretching back to 2015.

However, they stunned defending champions Wales last weekend, winning 22-21 in Cardiff to collect their first ever victory on Welsh soil.

Italy clinched the win a minute from time when full-back Ange Capuozzo attacked from inside his own half and Edoardo Padovani claimed a try that Paolo Garbisi converted to spark wild scenes of celebration.

Lamaro, who plays his club rugby with Benetton in the United Rugby Championship, could hardly have anticipated captaining Italy to their next Six Nations win when he watched their previous victory – a 22-19 triumph over Scotland – at a friend’s house as a 16-year-old.

However, he is now determined that the dark days are behind Italy and that he and head coach Kieran Crowley can help guide the national team to new heights.

"What we are trying to do is to create a positive process that allows us to be competitive in the game and obviously to be prepared before and after," the 23-year-old flanker told the PA news agency.

"We don’t want to get to the point again where we’re not competing and not having those results.

"From now on we really want to start to be competitive day by day, just by trusting our process.

"(The Wales result) is something that gives you confidence that you can be there, you can compete at this level, you can win a game in the last minute.

"We knew it, but for us as a team the result gives us a lot of confidence moving on." 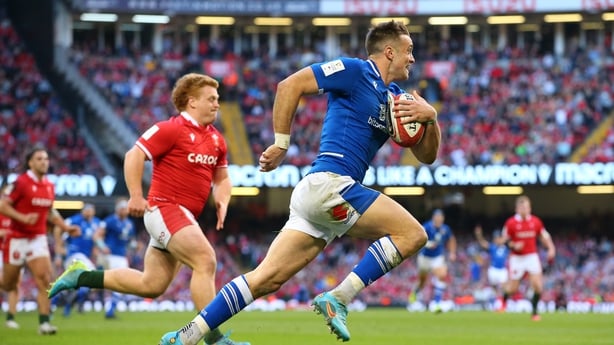 The next 18 months will be all about building towards the 2023 Rugby World Cup for Italy.

"Everything is planned to get to the World Cup in the best place we can," added Lamaro.

"This Six Nations was meant to be our foundation so that we can build on that and I think the great work has been done.

"Moving on it will get easier to refocus and to think about our foundations and our basics. That’s our standard and we don’t want to drop it.

"I’m so excited to work with this group because we are all young and we want to achieve the highest thing we can. That’s something that makes me so proud of the group in general and of the family we’re trying to build.

"I’m really happy to be their leader and to be on the front line with them all of the time."

One memorable moment from their victory in Cardiff came when Wales wing Josh Adams handed over his Player of the Match medal to Capuozzo, who has caught the eye with his two-try debut against Scotland and his key late intervention in the Welsh capital.

"I think that was a brilliant moment from him (Adams) and it shows how much respect there is between each other," said Lamaro.

"Ange is a really good guy. Even after two matches like that he’s been so calm and that’s something you have to be happy about because a guy like that with such a talent, it’s difficult to stay calm and stay humble."