Bernard Jackman and Donal Lenihan are both expecting Ireland to claim Triple Crown success this Saturday, but don't believe England will be able help Andy Farrell's side win the Six Nations title.

Ireland are France's only title challengers heading into the final round this week, and will need to beat Scotland at the Aviva Stadium, before hoping France slip up in Le Crunch against England in Paris (live on RTÉ2 and RTÉ Player) later that evening.

Regardless of events in Paris, a win for Ireland would see them take the Triple Crown, which they have only won twice in the last 13 years, and it would also be a first time doing so on home soil since 2004.

Jackman and Lenihan both believe Ireland will finish their campaign with a fourth win from fine matches, before attention turns to events at Stade de France.

While France have undoubtedly been the best team so far in the competition, they endured some nervous times against both Ireland and Wales before eventually seeing both results out.

And Jackman believes they will finish the job "in style" against Eddie Jones's side.

"England will see areas of that game, particularly how Wales dominated the kick battle and found grass, and how they were able to snuff them out defensively," Jackman said on this week's RTÉ Rugby podcast.

"The French will not see the flaws in that performance, they'll see the positives.

"I think they kept a reasonably high level of composure at the end, their defence was rock solid. It was a real Shaun Edwards-type performance. They're going back to Stade de France, having been away to Wales and Scotland, and got the job done.

"I think the atmosphere will be phenomenal, 9pm kickoff local time (8pm Irish time), the connection between the public and this team is phenomenal and I think they will be new men.

"They will be back to their best. England have the power to match them at the setpiece, but I think they're in a pretty good place.

"Obviously there is a chance, but I think France will finish in style."

That opinion was shared by Lenihan, who says Fabien Galthie's side showed they have they have the mentality to deal with the big occasion in last week's win in Cardiff.

"You talk about the mental challenge and the fact they were stressed and put under pressure, international rugby isn't all about being flash and scoring great tries," he said.

"France have that, they have more x-factor players than anyone in the championship, but there are times you just have to get down and dirty, get stuck in and defend, so I think a bit like Ireland at Twickenham, Friday night's game in Cardiff was a huge learning curve for this French team.

"We're 19 months away from a World Cup final. In terms of a dress rehearsal, Shaun Edwards has been talking about this: 'We're not a great team until we win something'. France haven't won anything in a long time, haven't won the title in 12 years, the pressure is on them now to perform on Saturday night.

"Of all the teams they want to beat is England. I think it'll be a huge test of this team, but I think they have passed every test that has come their way so far. 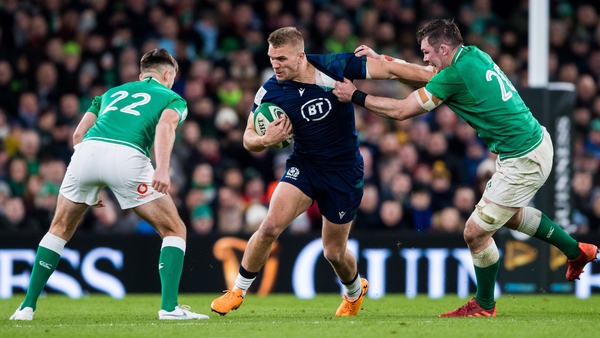