Eddie Jones has elevated Ireland to the status of red-hot favourites for Saturday's Guinness Six Nations clash after claiming that even baristas are trolling his England team.

Jones has circled the wagons amid the widespread expectation - including among bookmakers - that England will be eliminated from the title race in Saturday's penultimate round at Twickenham.

It comes as retired Ireland back rows Jamie Heaslip and Stephen Ferris, as well as their former head coach Eddie O'Sullivan, questioned the current health of the side under Jones.

England's head coach began the week by positioning Andy Farrell's men as favourites and insists they were even talked up when he was ambushed in a cafe.

When asked about the XV picked by Farrell, Jones replied: "We're more concerned about ourselves. What I do know is they're red hot favourites.

"I said 'just give me the coffee please'."

"It's a semi-final. One of the two teams progresses to the final, which is the last game. Both teams know what's at stake. But if you read the papers, there is only one team that has a chance of winning it.

"When you're playing against a team that has to basically jump out of the barrier and win, then you've got to make sure your horse is ready to go. All I've been doing is trying to get my horse ready to go."

Jones believes that Ireland benefit from operating within the game's most joined up club and country system, as well as the presence of a large and successful Leinster contingent.

"They're a very cohesive team. Eighty per cent of the team train for 11 months of the year," Jones said.

"They're a highly organised national union that gets the players in the best condition, so we've got to break their cohesion.

"Once we break their cohesion, we'll have opportunities to attack and we've then got to be good enough to take them. We're prepared and we're going to go after them."

Alex Dombrandt has sufficiently recovered from Covid to secure a place on the bench with Sam Simmonds ready to make his second start of the Championship at number eight.

Tom Curry has passed the return to play protocols from concussion to continue at openside and in the second and final change Joe Marchant is preferred ahead of Elliot Daly at outside centre.

Joe Launchbury is poised to make his first England appearance since December 2020 after completing his recovery from a serious knee injury to win a spot as second row cover on the bench.

"Alex is in good shape and trained well today, so he's ready to finish for us. Sam's a powerful carrier. He's a very physical defender, in particular with the way Ireland attack he's going to be important around that 10 area," Jones said.

"Joe Marchant is a specialist 13 who can play on the wing. He's very good under the high ball. I just think he might give us a bit more direct carrying.

"We're really pleased with Joe Launchbury's progress. He's had a tough time. In particular with his work around the maul, I don't think there's a better player in the UK than him. He gives us a particular advantage in that area." 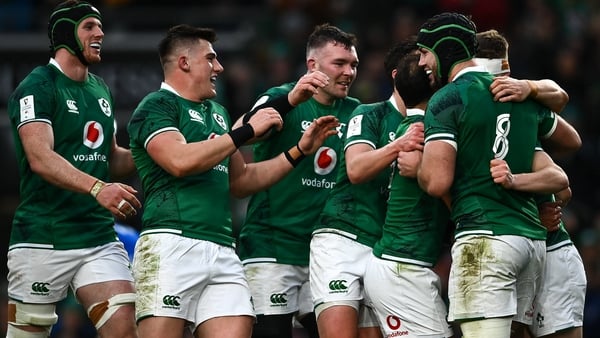