Defiant Scotland edged out England 20-17 to retain the Calcutta Cup in a pulsating showdown at raucous BT Murrayfield.

Eddie Jones' side, who had trailed 10-6 at the break, looked on course for victory after Marcus Smith turned the match in their favour early in the second half.

But a penalty try awarded against Luke Cowan-Dickie proved pivotal as Scotland - who won at Twickenham a year ago - went on to claim another dramatic triumph in this fixture courtesy of Finn Russell's 72nd-minute penalty.

There was a familiar look to the Scotland side, with 13 of the starting XV from the 2021 Six Nations victory in France last March selected by Gregor Townsend to face the Auld Enemy.

England, without key trio Owen Farrell, Courtney Lawes and Manu Tuilagi through injury, sent out a relatively inexperienced side, captained for the first time by 23-year-old Sale back-rower Tom Curry.

It had been a wet and blustery day in Edinburgh, but conditions subsided slightly by the time kick-off arrived.
England enjoyed a strong start, forcing Scotland on to the back foot for much of the opening 10 minutes, but they were unable to get any points on the board to show for it.

The Scots suffered what appeared to be a blow in the 12th minute when Ali Price had to go off for a head injury assessment, paving the way for London Irish scrum-half Ben White to enter the fray for his debut.

England eventually got the breakthrough their early dominance deserved in the 17th minute when Smith kicked a penalty from a central position after Jonny Gray was penalised for pulling in.

However, Scotland, who had barely been in the game as an attacking force, responded just a minute later by taking a quick lineout on the right, allowing Darcy Graham to jink his way forward before laying it on a plate for debutant White to dart clear and edge the hosts in front. Russell made no mistake with the conversion.

After a remarkable cameo, the try-scorer left the field in the 24th minute to make way for the return of Price to the action following his Head Injury Assessment.

Despite holding the initiative on the scoreboard, Scotland continued to spend much of the first half absorbing pressure and making tackles.

On the half hour, the hosts were fortunate to see a cross-field pass from Smith sail just over the head of Slade, who would have had a free run to the line wide on the right. Two minutes later, the Scots pulled off some defiant defensive work to hold England up over the line.

Smith reduced the deficit to one point with a penalty in the 34th minute after Scotland's Jamie Ritchie was penalised for using his hands in a ruck.

But in the last action of the half, Russell kicked another penalty to ensure the Scots, who had been outplayed in all departments, somehow went in at the interval with a four-point advantage.

England made a strong start to the second period and got within a point again when Smith kicked another penalty in the 48th minute.

Smith continued his one-man mission to turn the game in England's favour when he ran on to an offload from Ben Youngs and touched down to put his side in front in the 53rd minute. The Harlequins fly-half blotted his copybook slightly when he missed the conversion.

In the 63rd minute, Smith kicked his fourth penalty of the match to put England seven points in front and seemingly on course for victory.

But, incredibly, the hosts drew level with a 64th-minute penalty try after Cowan-Dickie was deemed to have knocked on Russell's crossfield pass as he batted the ball out of play volleyball style.

The Englishman was duly sinbinned and Scotland capitalised on their extra-man advantage as Russell won the game with a 72nd-minute penalty. 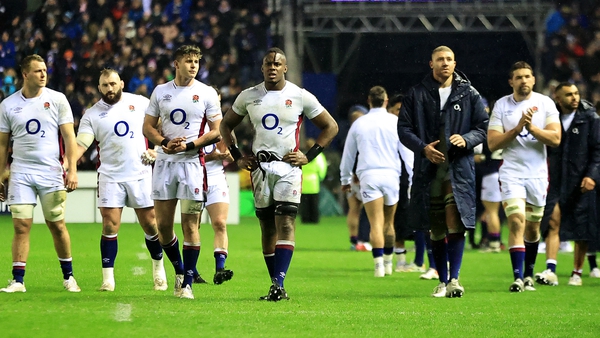 Jones: We've only got ourselves to blame for Scotland defeat