While Wales have an injury list longer than the Severn Bridge, there's always a sense of trepidation when they talk their chances down.

Given what happened Ireland in last year's Guinness Six Nations opener in Cardiff, there was extra wariness of the defending champions, coupled with the newfound expectation around the home side.

So when Mack Hansen went on a 50-metre lung-busting run, and Bundee Aki dived over for a try inside three minutes at the Aviva Stadium, there were as many sighs of relief as there were cheers in the crowd, many of whom were still taking their seats.

From that moment on, Ireland looked in control against Wales, and their win felt inevitable, even if it took them until the second half to put Wayne Pivac's side to bed.

Just as they did in the Autumn Nations Series, Ireland attacked with speed and variety, putting Tadhg Furlong, Andrew Porter and Tadhg Beirne in as first receivers regularly, and giving Sexton more space and time to dictate the game.

It was far from perfect though, Sexton with a couple of rare miscues off the tee, and some inaccuracies with their final pass in the Welsh 22 meant it was 10-0 at half time, when it really could have been more.

But Ireland killed off the game inside the first 10 minutes of the second half, Andrew Conway scoring his 14th and 15th try in Irish colours, either side of a Josh Adams sin-bin for a reckless shoulder charge on Sexton.

With Adams still in the bin, Garry Ringrose sprinted in from 30 metres to secure the bonus point, and while Ireland did miss a couple of chances to run up a score on Wales, they saw things out comfortably, with Hansen appropriately named Player of the Match.

If Hansen needed an early settler on his debut, he had it with less than 60 seconds on the clock; a loose ball found its way onto his wing, and the 23-year-old fended off the outside man before marauding 50 metres into the Welsh 22.

His chip-kick over the top couldn't find a green shirt, but from the resulting lineout, Ireland had their try.

Van der Flier broke from the back of a maul to carry infield, before Doris and Furlong gained ground. But Ireland wanted to go wide, and switched play back to the left wing, with Beirne standing in as first man.

Beirne passed to Sexton who quickly tipped on to Hansen, and spotting Aki unmarked on the wing, he floated a gorgeous looping pass to his Connacht team-mate, whose seventh test try followed.

Sexton's touchline conversion was perfect, but he missed the chance to extend the lead to 10-0 after nine minutes, Andrew Porter winning a jackal penalty on the 22, but the captain's shot at goal from slightly to the left of the posts was miscued and floated wide.

Five minutes later, he again pushed a penalty attempt right and wide, this time from 40 metres, throwing his hands in the air in exasperation as he saw another three points get lost in the wind. His bemused smile while doing so punctured any potential for tension.

When a third penalty chance presented itself on 19 minutes, this time almost straight in front of the posts, he once again called for the tee, taking some sting out of his shot as he casually kicked it between the posts.

That made it 10-0 with a quarter of an hour played, and in reality the scoreline flattered Wales.

They had a scent of an attack shortly after when they turned over a poor Irish lineout, but lost possession within a handful of phases, hooker Ryan Elias running straight into Beirne, who smothered the ball and held the player up to win a scrum and a chance to clear the lines.

There were mistakes creeping into Ireland's game as the visitors finally started to play. Tomas Francis was giving Porter trouble at the scrum, and the messy service led to Gibson-Park throwing a sloppy pass to Aki for another Welsh turnover.

Wales were enjoying plenty of possession, but the bulk of it was coming in a series of back-and-forth phases outside the Irish 22, as they struggled to get any real gainline success, while Ireland were at times overplaying their hand as they tried to exit.

As they were in the Autumn, Andy Farrell's side were looking to run the ball, and brought Hansen in off his wing on a number of occasions, just as James Lowe did in November.

On 35 minutes they got back down the the Welsh 22 after a beautiful Keenan offload to Van der Flier, but some good defending by Pivac's side saw them turn over the ball and clear their lines.

Ireland still had one more chance to extend the lead before the break, running through several phases close to the Wales line, but Gibson Park's speculative pass to Hansen on the wing was too high, and drifted over his head into touch.

After the frustrating end to the first half, Ireland came out flying when the game resumed, and had their second try inside four minutes.

After a pair of penalties were kicked to the corner, another advantage followed for Ireland, which allowed Sexton a free play, and his looping pass to the wing found Conway who had to slide to make the catch.

The Munster man still had work to do to score with three covering Welsh defenders to outpace, holding off the challenge of Adams to lurch for the line and ground the ball, and staying in play by a matter of inches.

Things soon got worse for Wales, as Adams was sent to the sin-bin for a shoulder charge on Sexton, taking out the Irish captain with a needless body-check as the pair looked to be contesting a 50:50 ball.

They were made to pay for it, Conway crossing for his second try within 90 seconds; the move starting as Van der Flier found a gap to break into the 22, and with Welsh defenders scrambling, Gibson-Park threw a skip pass to the near touchline, where Conway had all the time in the world to touch down.

Again, Sexton went for the low-fade with his conversion, judging it to perfection and making it 24-0.

Such was Ireland's dominance they the 54th minute saw them concede their first penalty of the game, as Farrell went to his bench and brought in Finlay Bealham and Peter O'Mahony for the excellent Furlong and Conan.

The Adams yellow card was proving to be an expensive one, and as he waited on the touchline to make his return on 59 minutes, Garry Ringrose motored through the Welsh defence to secure Ireland's bonus point.

Porter had stripped a Welsh carrier of the ball on the edge of the Welsh 22, and Gibson Park used the turnover to move it wide fast, Hansen and Aki both shifting on the ball to Ringrose, who outpaced the covering Welsh defenders to grab his 11th Irish try on his 38th cap.

With the game over as a contest, Ireland started emptying the bench, with James Hume and Dan Sheehan both getting on for their Six Nations debuts.

Sheehan had eyes for his second try in Irish colours as their maul worked its way towards the Welsh line, but an accidental offside saw them turn over the ball.

With five minutes to play, Taine Basham pounced to give Wales their opening try, the openside flanker making an excellent read to intercept a Beirne offload and run in under the posts.

It was all Wales could offer though, as Ireland easily extended their winning streak to nine matches and raising expectations even higher ahead of a trip to Paris next week.

Follow all of Ireland's Six Nations games via our live blogs on rte.ie/sport and on the RTÉ News App or listen to live radio coverage on RTÉ Radio 1. Watch live TV coverage of France v Italy (Sunday 6 February 3pm) on RTÉ2 and the RTÉ Player. 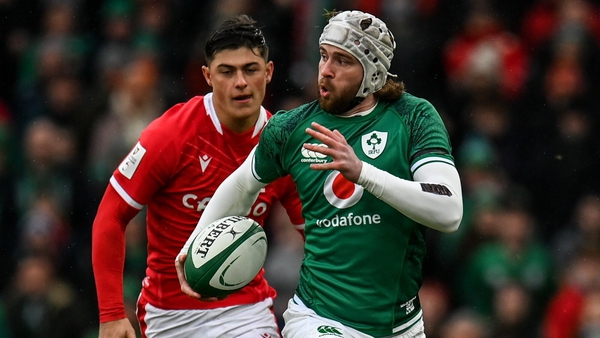