Ronan Kelleher says the new scrum law being trialled during this year's Six Nations is a welcome development.

After consultation with the world's leading hookers, World Rugby has confirmed it will be clamping down on what's known as 'axial loading' in the scrum, with the new law being tested in the men's women's and U20 Six Nations.

'Axial loading' occurs during the scrum engagement process when referees call 'Bind', which in recent years has seen the opposing hookers leaning their head on each other for balance, with an estimated 100kg of force running through their spine and neck.

Under the new trial law, both hookers will have to put their weight on a 'brake foot' until the referee calls 'Set', which will significantly reduce the pressure on their necks.

"Often, in recent years, there would be a lot of weight on binds and that leads to pre-engagements and scrums going down", Ireland hooker Kelleher said.

"So it's about preventative measures to protect the hookers’ and tightheads’ necks really.

"Now that weight will not be on your head, but on your front foot, so there should still be a gap to fire into as a front row.

"To be honest, some games it would be worse than others but it got pretty bad there for a while.

"You just had to deal with it I suppose and a lot of it would come down to your recovery during the week and how you'd recover your body to make sure you were ready to go again at the weekend.

"I suppose at the time it was just part of the job but now I’m glad they’re putting in measures to try and fix it now."

The 24-year-old looks set to start alongside Andrew Porter and Tadhg Furlong in the front row for Saturday's tournament opener against Wales, with Andy Farrell set to name his starting team this afternoon.

Having been used mainly off the bench in Farrell's first 18 months in charge, the Leinster man was outstanding in the Autumn Nations Series last November, and looks to have overtaken Rob Herring in the depth chart at number two.

Kelleher has also had a front row seat for Porter's transition from tighthead to loosehead this season, a change that has added a new dimension to Ireland's attack.

"It's just a credit to him how seamless he has made it look," the hooker added.

"It is incredibly difficult to switch over. For others, it's learning a new position but for him, he obviously played there when he was younger in UCD and in school so he had some background there, but just how effortless he has made the switch seem has been very impressive.

"Then obviously to have himself and Tadhg (Furlong) on the pitch has been of incredible benefit to the whole side, just the energy and fitness he brings as a loosehead prop."

Porter's transition has been relatively straightforward so far, with his scrummaging improving bit by bit as the season progresses.

For Kelleher, there has also been an adjustment to make, as he becomes more familiar with how his loosehead binds to him, or where he positions himself compared to his fellow looseheads.

"It would mainly be on how he feels and he'd be communicating with all the other looseheads in Leinster, chatting to Cian (Healy), Ed Byrne, Peter Dooley. Not that he needed much help but they were all giving him little tips I suppose, little cues.

"For me, it was really just getting the feel with him again, getting comfortable with him on the loosehead side.

"It was fairly seamless and by the time I was back scrummaging with him, he had done a great job flipping back.

"A lot of it comes down to his own work reviewing scrum sessions and looking back at different ways, comparing what he's done with other hookers and then telling me what makes him feel good, then little tweaks along the way to make the whole thing better."

"It has been great. It's not just the three of us, it's everyone in the squad. You look across the competition for places, it's pretty impressive at the minute.

"Everyone is chomping at the bit in training, especially at scrum time, so it has been great. It's nice to get the recognition that the likes of Tadhg and Ports are getting, so it's great to be lumped in with them." 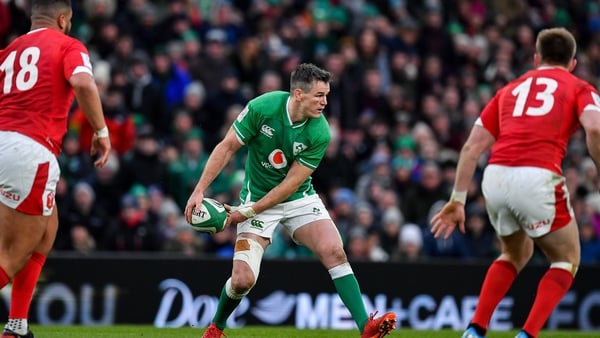