Eddie O'Sullivan believes Ulster's Robert Baloucoune has the "extra weapon" to really own one of the wing positions for Ireland in the upcoming Six Nations.

Baloucoune, who made his international debut and scored a try in the process against USA last July, has been in impressive form for his province this season and the 24-year-old Enniskillen native would be former Ireland head coach Eddie O'Sullivan's choice to start on the left wing from the available squad members in the Six Nations opener against Wales this Saturday.

"I think Baloucoune for me brings that finishing edge and his defence has improved dramatically," O'Sullivan said on RTÉ's Against The Head as he, Fiona Coghlan and Bernard Jackman picked their potential Irish starting XV for the Welsh game.

"He's very physical, even though he doesn't look it - he's very slight looking - but he really hits hard.

"I just think he has that extra weapon and again he's on form. But again if (Andy Farrell) goes with Keith Earls, we're not going to lose any sleep."

O'Sullivan added that Ireland's strength in depth was such that along with the other position realistically up for grabs in the starting XV - inside centre - the quality was at a level that there is little between those fighting to make the team.

"We're basically discussing two positions and if we're wrong on both of them, no one is going to lose any sleep," he said, adding that Bundee Aki would be his pick on form to start against Wales in the 12 jersey ahead of Robbie Henshaw.

"This Irish squad is as strong as it's ever, ever been in terms of footballers. There are footballers from one to 15 right the way through it and that's the beauty of what we're working with at the moment." 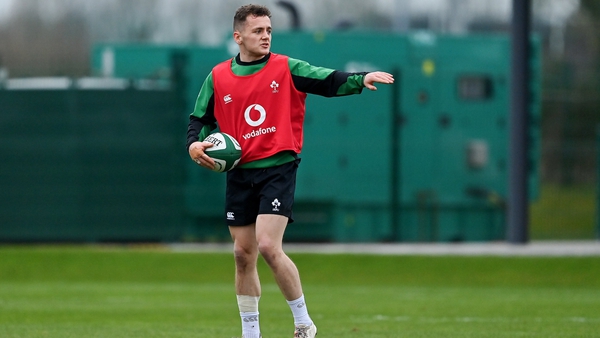 Michael Lowry 'a real beacon' for all smaller players