Connacht suffered another late collapse as 14-man Stade Francais came from 11 points down to claim a thrilling victory in Paris.

The Irish province had already qualified for the knockout stages and led for most of the game thanks to tries from Alex Wooton, Caolin Blade, Tom Farrell and Jarrad Butler and 17 points from captain Jack Carty.

However, just like last weekend's game against Leicester, Connacht were unable to close out victory as they conceded 17 unanswered points during a ragtag final 13 minutes.

Connacht quickly found their rhythm on the 4G pitch and began to apply pressure in the Stade Francais 22, and after several powerful carries a crossfield kick from Sammy Arnold was taken by Wootton.

The wing showed tremendous footwork to dance past two defenders before showing his power to score the opening try, which Carty converted.

Nicolas Sanchez put Stade on the board after 17 minutes with a regulation penalty after Connacht were penalised at the proceeding scrum.

Stade Francais then flexed their muscles with a move straight from the training ground. The hosts won the lineouts, and a lovely inside pass from William Percillier sent Lepegue clear, with the left wing finishing brilliantly at the far corner.

Sanchez converted, but Carty levelled the scores from the kicking tee before Stade had a try disallowed. Leo Barre looked to have scored but the television footage showed Australia international hooker Tolu Latu entering a ruck with no arms. The try was chalked off and Latu was sent to the sin bin.

Connacht made the most of their numerical advantage with their lively No 9 Blade sniping over from short range following a well-worked driving lineout by the visitors. Carty added the extras and Connacht held a 17-10 half-time lead.

Stade scored within two minutes of the second half with a terrific break from Sanchez opening the Connacht defence. The Argentine playmaker drew the last defender to put Laumape over at the far right-hand corner.

The French side’s hopes then suffered a major setback when Latu was sent off in the 46th minute after receiving a second yellow card for swearing at referee Wayne Barnes.

Connacht made them pay almost immediately with Farrell making the most of a wonderful offload from Arnold to score their third try of the match.

But Stade were not prepared to throw in the towel as Hamadaou exposed some weak defending to score.

However, Connacht claimed their try bonus point soon after with Butler finishing a brilliant attacking move.

Stade Francais came straight back to make it a one-score game again when Chapuis scored out wide after a quickly-taken penalty. Replacement Joris Segonds converted, while Connacht flanker Conor Oliver was sent to the sin bin for a professional foul.

The hosts took the lead with just five minutes to go with a long pass from Segonds allowing Lapeque to turn inside for the score, and Segonds then slotted over a last-minute penalty to keep their hopes alive. 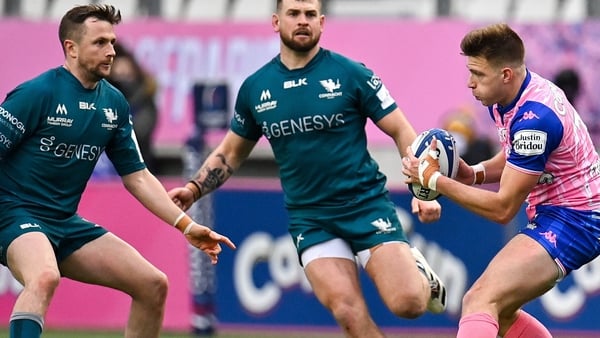