Dan McFarland lavished praise on his young Ulster players after they were to the fore in securing a spot in the Heineken Champions Cup last-16 and added that he has had conversations with Ireland head coach Andy Farrell about Ethan McIlroy's potential.

The province earned a bonus-point away victory over Northampton Saints on Sunday, with Man of the match Michael Lowry scoring two tries, and Robert Baloucoune and Nathan Doak also on the scoresheet. Doak added two conversions.

A feature of Ulster's win was the impressive performances of their back three - full-back Lowry and wings Baloucoune and Mcllroy - who caused their opponents a litany of problems in attack.

"They've got a long way to go, these guys are not the finished article, they can be much, much better and they'll get that through exprience," Ulster head coach McFarland said of the youthful cohort.

"But in terms of that talent that they have and their desire to improve on a week to week basis, it's very exciting.

"Do I think they don't get the credit? I don't know. Michael Lowry's getting man of the match, everybody's talking about how good Robert Baloucoune is. Rob's been recognised by Andy Farrell, Michael Lowry has been in that conversation.

"I've chatted with Andy about Ethan McIlroy and they know how good he is and obviously Rob probably got some of the plaudits tonight and Michael got man of the match but Ethan's been absolutely tremendous for us.

"He's a really smart rugby player, who's got one of the most deadly side-steps certainly that I've seen within our squad."

Going on to praise 22-year-old Stewart Moore who started at centre, he added of his Ireland-capped midfielder partner on the night James Hume: "Just really good players and obviously James Hume has been producing big performances in big games."

On the importance of the win over Northampton to advance to the next stage in Europe, McFarland spoke of his pride at how his team performed overall.

"I don't underestimate the challenge of playing Northampton and winning away from home in Europe, unless you draw one of the French teams that gives up, it's really, really difficult. So I'm very proud of the efforts and the skills the lads put in tonight." 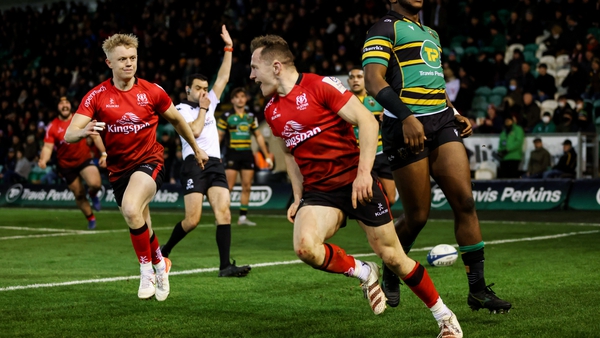