While the evolution in style of play has received plenty of attention during a fruitful November, Donal Lenihan believes Andy Farrell deserves credit for adding to Ireland's squad depth.

Reviewing Ireland's win over Argentina on RTÉ's Against The Head, Lenihan pointed out the sheer number of players the head coach has called upon during a progressively positive 2021.

"People were surprised that Andy Farrell didn't make more changes for that Argentine game but he did that for a reason - he wanted that platform up front," he said.

"But if you look at it in the wider context, we've played 10 internationals this year and 52 different Irish players have seen game-time. That's a phenomenal amount of players.

"A lot of them were integrated in that July period when we played Japan and USA because you had eight fellas away with the Lions.

"But to expose 52 players in one season is incredible and I think that's gone under the radar a bit and Farrell deserves credit for that."

But Lenihan pointed out that a small number of areas in the team remain where more depth could be required, with tighthead prop being one position necessitating cover behind Tadhg Furlong given Andrew Porter's switch across the front row to loosehead.

Donal Lenihan has been impressed with the "whole new young generation" that has emerged for Ireland during the Autumn Series #rterugby #AgainstTheHead pic.twitter.com/IGMJ9ZGC9I

"In terms of your strength in depth, there is still a couple of areas, given that Andrew Porter has gone to loosehead, I think there's a space behind Tadhg Furlong now at tighthead," he said.

"Finlay Bealham played there against New Zealand off the bench, Tom O'Toole came on and got a couple of minutes against Argentina.

"And the great debate behind Johnny Sexton, I think the plus is Joey Carbery had a really good game (against the Pumas) and to be fair Harry Byrne when he came on might have tried a little bit too hard at times but some of his passing was superb.

"We know he has the ingredients - his progress has been stifled a bit like Joey because of injuries of late - and we know now that Johnny Sexton is out for six weeks so there's a window here where you'd like to see Harry Byrne kick on and I think we'll need those players to filter in behind the main players.

"We know the Six Nations is going to be hugely physical. You need that strength in depth as you will going to New Zealand next summer." 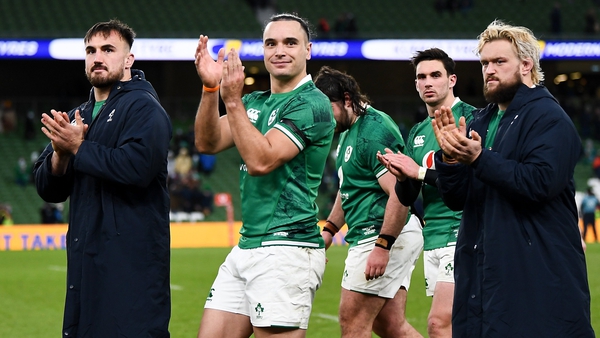