Former Ireland head coach Eddie O'Sullivan has said that New Zealand got a taste of their own medicine as the All Blacks fell to a 29-20 defeat at a rocking Aviva Stadium.

O’Sullivan saw his side lose all seven games against New Zealand when he was in charge, and too often there was a sense of inevitability about the result from early on in the game.

He felt that it was the same in Dublin, only this time an Irish victory looked a very likely end result from way out even if their opponents fought gamely against Andy Farrell’s rampant side.

"In fairness to New Zealand they got two tries and nearly pulled something out (of the bag) but you just couldn’t see the way back for them," said O’Sullivan while on punditry duty for RTÉ2.

"There was one team on the field. That’s kind of what New Zealand would do to us, it was reversed roles today."

Fellow RTÉ pundit Jamie Heaslip also pointed to the big moments that went Ireland’s way despite New Zealand’s reputation for ensuring they went to them.

"This game came down to big moments," he said.

"Andrew Conway in the first half stops a try on the line. Peter O’Mahony misses a tackle off the scrum but tracked it so well and, big moment, gets the poach.

"That’s what games at this level are decided by."

Ireland dominated the first half but James Lowe’s try was their only reward as they somehow trailed 10-5 at the break.

At the interval, the RTÉ pundits wondered whether those performance levels could be maintained in the second period, and Stephen Ferris said that the team emphatically answered in the positive.

"They were exceptional from minute one," said Ferris.

"Eddie touched on it at half time about could they keep it going, could they could keep that intensity up and I thought they upped it another level." 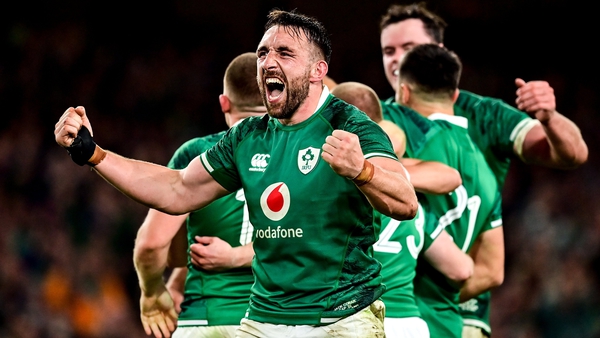 Farrell: It's a fantastic day for Irish rugby