Ireland have arguably never had such a high-calibre stock of back rows at their disposal.

That the likes of Dan Leavy, Paul Boyle, Conor Oliver, Rhys Ruddock and Jack O'Donohgue cannot break into a November squad is telling in itself.

Add in the injured Will Connors, who was one of Ireland’s stand-outs during lockdown rugby, and it’s an area flush with talent as Andy Farrell plans for the World Cup.

For his opening gambit, against Japan tomorrow, the head coach has called on Lions number 8 Conan, his Leinster team-mates, the in-form Van der Flier, and Caelan Doris, whose handling skills set him apart.

It’s not a call that David Wallace, the former Munster, Ireland and Lions flanker, entirely agrees with, and he’s hoping that Coombes comes into the equation sooner rather than later.

Speaking before the team announcement, where Farrell revealed that Coombes didn’t come into the reckoning due to a (non-Covid) virus, Wallace heaped praise on the young Skibbereen man, who turns 24 next month.

"I’d love to see Gavin Coombes. I think he’s phenomenal, he’s a player who can get yards that no other player can," Wallace, speaking at a Canterbury event, told RTÉ Sport.

"For me, especially at international level, that just puts you on the front foot when those yards are harder to come by. He’s a unique talent and for me he should have a dozen caps at this stage."

To the forefront of Wallace’s thinking is the fact that Ireland face a daunting fixture list over the coming season.

Following the games against Japan, New Zealand and Argentina, they then travel to England and France in the Six Nations before a summer tour that consists of three matches against the All Blacks. That's as hard as it gets and Wallace wants the building blocks in place.

"He breaks the mould compared to a lot of the other players," adds the former flanker of Coombes, who has two Ireland caps and has made 41 Munster appearances since making his debut in 2018.

"He’s a different type of player and one that we probably need at international level.

"When you are in those tough positions and we’ve all seen days when Ireland have struggled to get over that gain line against a strong defence and he’s a guy who can do that and maybe have that 'x factor’ where you break that link and suddenly there’s a chink and you get an offload and you are away.

"I’d love to see a lot of him because we are going to need a really strong squad this season."

Wallace, 45, has no qualms about the rest of the back row and is particularly impressed with Van der Flier's form.

"I know a lot of kudos has been given to Paul [O’Connell] and the rest of the coaches, getting him to focus more on that side.

"To be a complete back row you need to have that. He's a machine around the field in terms of intensity and workrate, but we see now he’s a really good carrier, too.

"He’s growing in confidence and knows he can do it at the highest level, that’s another string to his bow.

"There’s always the talk of Tadhg Beirne going in there but Caelan Doris is going to go at 6.

"There is plenty of choice and there’s guys there who can interchange. We’re in a strong position." 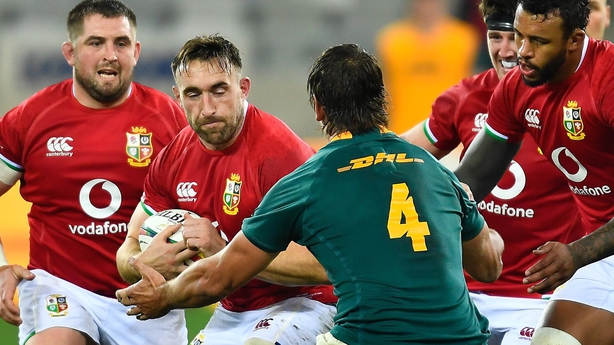 The Limerick man says he’s not forgetting about a certain three-Test Lion but that there’s a balance to be struck.

"Jack Conan is obviously a fantastic athlete, he did amazingly on the Lions tour," he says.

"He’s a different type of player and he’ll get his game time but for me I’d love to see more of Gavin Coombes over the two games, even a 50-50 [split]."

The debate about Ireland's best back row has a long way to run yet.