I'm not sure if the USA vs New Zealand match on Saturday was an exhibition game, a heavily one-sided test match or an attempt at developing the game but whatever it was, it didn’t sit that comfortably with me.

First of all, I get how sport works. The All Blacks are consistently the best team in the world, although South Africa are currently spoiling that party.

But they are also the most marketable team and nation around the globe because of the legacy and culture that surrounds them. They will be used to grow the game and they will leverage that to make some money from it too.

We’ve seen soccer teams tour the USA in pre-season tournaments and fixtures for the last couple of decades in an attempt to grow the Major League Soccer league and there is nothing at all wrong with that. American sports have lucrative owners and they can offer these clubs a payday, combined with franchise promotion for the visiting clubs. It helps that the USA is a great place to visit, so all-in-all it’s a no brainer for the visitors.

Mark Robinson, the New Zealand Rugby Union CEO, came out straight away and acknowledged the fact that the All Blacks would make a lot of money by competing in a fixture against a weakened USA Eagles side, somewhere in the region of two to three million dollars of revenue for the All Blacks. So, when there are mentions of exhibition games and a payday for the teams involved, it actually works for both sides.

The New Zealand franchises are not as lucrative as what we see in France and the UK and there lies one of the reasons why many players go abroad to top up their wages to secure their financial future, before returning for a World Cup cycle, or they might stay abroad depending on the stage in their career and the competition back home.

It isn’t just the USA looking for a handout - it suits the All Blacks to build their brand in a different continent while also making some money from the game itself. This can be reinvested into their own domestic game to a degree, and it isn’t just about USA.

There is a lot of talk that money is what develops the game in these second-tier nations. However, I do not buy that argument as much when the US are involved.

Of course, it’s still a true statement. Yet, there seems to be a huge difference between the USA and other developing nations. When you look at the teams outside of the top 10 in the rankings, but still above USA, you’re talking about the likes of Fiji, Georgia, Samoa, Tonga, Uruguay. They don’t have the sponsorship opportunities, the business tycoons, the education systems that develop these business leaders and the general infrastructure that comes with already having hugely successful franchises in other sports.

Add to that, there are owners of sports teams in the USA that can help to create these Major League Rugby franchises, similarly to what is going on in MLS. I’m not saying that rugby in USA hasn’t had its issues. They have been trying so desperately to develop this cash cow for the benefit of global rugby, that they have forgotten to do the basics in some situations. They put the cart before the horse so to speak.

They have been successful in hosting the Sevens Rugby World Cup but forgot to do the basic planning which resulted in big financial losses. They have thrown a lot of money at the game already in the hope of developing an attractive model for global superstars, but it just hasn’t kicked off in the way they would like it to. They have got the athletic pool, they just need to make this attractive as an American athletes-first sport, and not for the failed athletes of other disciplines.

So, yes, I understand that there’s money involved and that’s what makes the world go round. Every rugby union needs money. A lot of rugby teams and franchises operate by making losses. It’s a tough world, particularly when crowds were demolished due to Covid-19 and there wasn’t a whole lot of money coming into these unions.

However, having an international match with the All Blacks, in this nature, can’t be seen as developing the game. Losing 104-14 won’t do the development of USA rugby any good.

Where was the planning in having a game outside of an international window, meaning that the hosts couldn’t field any players from outside MLR? If they are to compete and put themselves in the shop window against the best in the world, surely you’d like for them to be at full strength to do so.

As a spectacle, of course we saw brilliance from the All Blacks, and the USA managed to score two tries which gave them something to cheer about. However, the second try was more than dubious, and the stadium did not even have the right camera angles to see the end-on view of the touchline. It felt like the officials were doing their best to get it over the line. 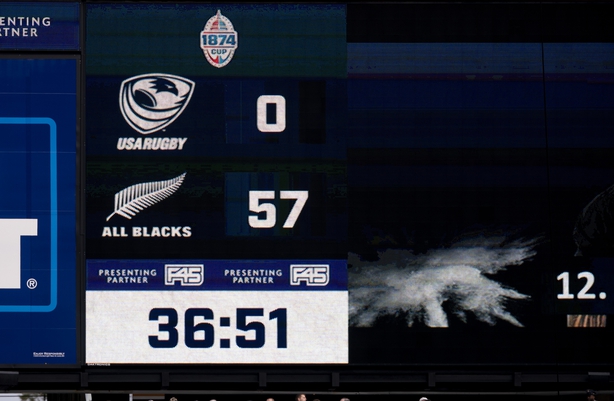 These one-sided affairs aren’t even that great to watch for true rugby supporters. There’s a lot of stop-start, handling errors due to timing issues and very little continuity in the game.

I couldn’t help but think that if it was about truly developing the game in the US, the All Blacks could be used a lot differently. Could they spend the week in camp with the USA Eagles? I know there are Covid ramifications here but if you wanted to make it happen, I’m sure there could be tests and bubbles to make it viable. Would they be much better served passing on their knowledge and almost coaching the coaches and players to bring their knowledge up a level?

I know that the All Blacks trained with the Munster academy a few years back while on a tour to play against Ireland. Some of the players a few years ahead of me still speak about it.

The exhibition didn't even reach the intended 50,000 supporters, coming up short by 10,000

The All Blacks' star-studded back line did set piece plays against the academy lads and ran a basic play in the first set-piece. The academy players thought that things could be worse, and they could go up against these guys, until the second set-piece ripped them apart. The first was only to figure the defence out, the second was to put the dagger in and show their class. These are the kind of moments that will develop the game at a level below, and it was a huge moment for the players involved.

Maybe these kinds of sessions happen in non-Covid restricted years, as Mark Robinson alluded to the fact that promotional and development opportunities were less this year due to the ramification of Covid. The teams can still have their exhibition to make money and reach corners of support that are untouched. However, the exhibition didn’t even reach the intended 50,000 supporters, coming up short by 10,000.

The pitch was also highly frustrating, if you’re trying to make a test match, or an exhibition game as such, you’d surely go to a level of detail that can wipe out the NFL lines and play on a properly lined rugby pitch, so the spectacle is easier on the eye. But that’s my own gripe, I’m sure.

I’m not sitting up here on the IRFU ivory tower either. I’m aware that we got our beatings from the All Blacks, both home and away, and teams must start somewhere. But USA rugby seems different. Of course, the All Blacks have given these types of games to the Pacific Nations as a nod to a lot of the players heritage as much as giving them a spectacle to make some money from which they so desperately need.

USA Rugby filed bankruptcy and nearly immediately put in a bid for three World Cups. It can’t be the same as dealing with the development of other tier two nations.

Regardless, there are loads of interesting and competitive match ups in the international window throughout the next few weeks and we will get to see where Ireland currently stand against the globetrotting All Blacks too. There is certainly a more exciting test window ahead.