Leinster made light work of Scarlets in the United Rugby Championship, running seven tries past the Welsh side at the RDS.

It was a ruthless display from champions as they made it four wins from four games.

Leo Cullen called on two Test Lions to bolster the side that hammered Zebre last weekend, Tadhg Furlong and Jack Conan back in the starting XV alongside tourist Kelleher. 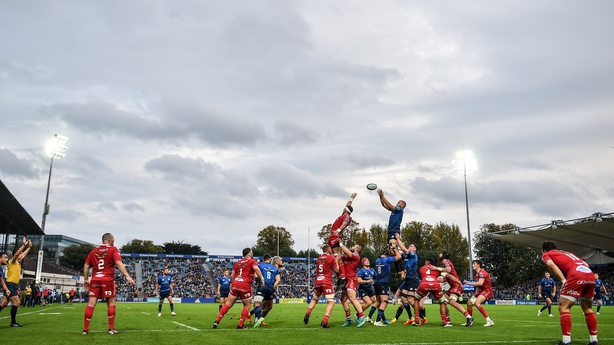 The visitors had described their own performance last week as "embarrassing and unacceptable" and the last thing the 2017 champions needed was a trip the face the four-in-a-row winners.

Only twice in 15 attempts had Scarlets beaten Leinster at the RDS.

The hosts shaded the opening exchanges that were played at a high tempo on a calm evening in front of 14,055 spectators, slightly below the 75% capacity that was permitted.

But, after out-halves Sam Costelow and Johnny Sexton traded penalties in the second and eighth minutes, it was Scarlets who struck for the first try ten minutes later.

Seemingly running out of space near the sideline, Johnny Williams somehow offloaded to full-back Ioan Nicholas, who fed Johnny McNicholl a 20-yard run-in to the corner. 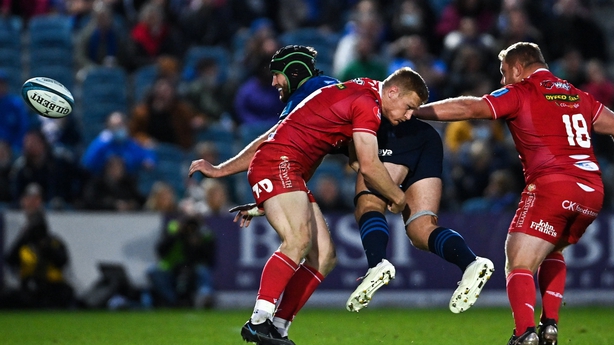 However, it was a score that just served to awaken Leinster and they dominated for the rest of the half.

Kelleher got their opening try, emerging from a pile of bodies over the line following a lineout maul.

Then following more pressure on the line, the energetic Porter barged over with Sexton converting.

The clock was deep in over-time at the end of the half when referee Marius van der Westhuizen ran under the posts to award a penalty try, sick of repeated Welsh infringements close to the line and Leinster deservedly led 22-8 at the break.

Dwayne Peel's side knew they faced an uphill battle in the second half and their climb got steeper when Kelleher was alert to pounce on a loose ball, making ground before feeding Doris for a run-in amid hesitant Scarlets defence. 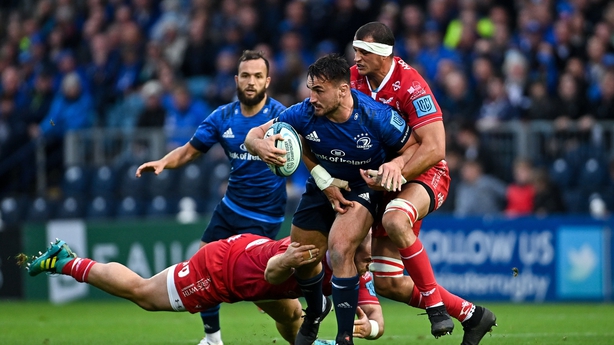 Ciaran Frawley, who kicked the conversion when Sexton declined, then suffered a nasty head knock when colliding with Gareth Davies but the centre, who was named man of the match, was passed fit to return to the field after a head injury assessment.

That was the bonus point wrapped up by the 46th minute but Scarlets, again with the lively McNicholl, who later went for for a HIA and was subsequently yellow-carded, to the fore hit back, this time the wing popping the ball inside for Lezana to grab a try on debut.

Frawley, upon his return, was involved in Leinster’s next score, however, making yards before replacement Healy burrowed over, with Ross Byrne, who replaced Sexton in the 51st minute adding the extras.

Sheehan, on as a replacement scored his seventh Leinster try with 10 minutes to play, with Byrne this time converting from the sideline as Scarlets continued to list.

There was still time for Sheehan to add another, collecting a cross-kick out wide before running under the posts to complete a miserable night for Scarlets, the last team prior to Leinster to win the championship, five seasons ago.